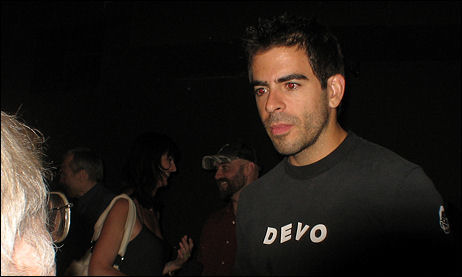 The idea was mainly to size up the 35 year-old Roth, who’s recently been on the skillet for two reasons. One is his having been tarred as the leading purveyor of “torture porn” (a term coined two years ago by New York magazine critic David Edelstein) and particularly due to the loathing expressed over the fetishistic gruesomeness in Hostel Part II, particularly the scene in which a character played by Heather Matarazzo is hung upside down and knife-sliced to death. The other is the recent notion that torture porn is on the wane or starting to be “over” due to the underwhelming earnings generated by Hostel Part II.
I learned last night that Roth is a bright, sophisticated operator — he’s hard-core and full of fire. He knows himself, his movie history, his directors, how to shoot cheap, what he’s proudest of, etc. The key thing is does he want to keep on being “Eli Roth” or does he want to shift into a new gear in order to avoid being typed and confined within the walls of the horror/torture-porn dungeon? (You’ll hear me asking this right after Feeney opens the session up to questions.)
The talk went on for a little more than an hour. I came out of it feeling a lot more respect for Roth than I had going in. He’s much more talented and sophisticated that his films and subject matter suggest. I only hope he doesn’t end up like Tarantino — a B movie fetishist and wallower who refuses to do anything but recycle and reconfigure old-time exploitation movies he fell for in his teens and 20s.