I think it’s fantastic that Michael Apted‘s Stardust (1974), one of the best movies about the exterior and interior life of a rock musician ever made, is being re-released on August 10th. Okay, kidding. The Stardust that is being released on 8.10 is another matter — an adaptation of Neil Gaiman‘s fantasy novel, with the direction by the undeniably talented Matthew Vaughan (Layer Cake). 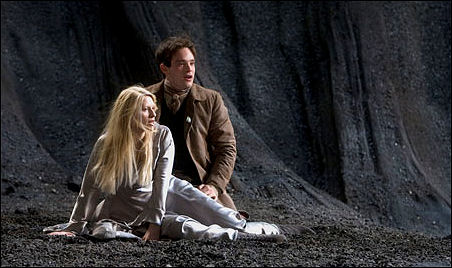 The synopsis — “a young man makes a promise to his beloved that he’ll retrieve a fallen star by venturing into the magical realm” — does not set my heart or soul aflutter. At all. The trailer indicates an agreeable vibe, I”ll give it that, and I feel professionally obliged to see it, yes. But my instinct, frankly, is to run in the other direction. Any and all films dealing with “magical realms” are absolute no-nos in this corner. God, what a Frankenstein genre was created by the dreaded Peter Jackson!
The presumably well-paid Stardust costars are Charlie Cox, Claire Danes, Robert De Niro, Sienna Miller, Michelle Pfeiffer, Jason Flemyng, Peter O’Toole, Ian McKellen and Rupert Everett.