The Guardian‘s Geoffrey McNab has written about the the radical youthifying of Beowulf costar Ray Winstone by director Robert Zemeckis and the sophisticated CG monkeys hired to facilitate. Interesting, but I’ll take bets with anyone that the final visuals won’t be convincing. I just don’t think we’re “there” yet. Ian McKellen‘s digital facelift in Brett Ratner‘s X-Men: The Last Stand didn’t get it. 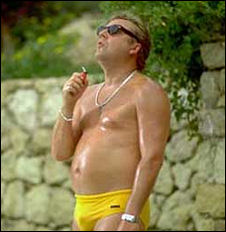 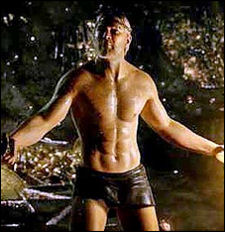 I first met Winstone in ’79 at a Manhattan party for Scum, a good tough drama about British “borstals” (prisons for juvie delinquents). I was with two women — a slender blonde I was seeing at the time and her pretty, endearingly buxom friend. I was feeling a little fizzy, but Winstone was even more in his cups because he told me he wanted them both. “What about it?” he said with a smile. I was startled for a second or two, but I laughed and said, “Sure, man…go for it.”
I said this knowing two things. One, his chances were zip with the blonde, and two, that he therefore had very little chance of scoring with her friend. (They were totally glued together that night — Winstone would have had to have gone home with both or neither.) Besides, Winstone wasn’t serious. He was probing to see if I’d get pissed or defensive. When I said okay he smiled and put his arm around my shoulder and said “you’re okay, man” or words to that effect.
I’ve never forgotten this night for one other reason. What Winstone was dreaming about came to pass for yours truly. Thank God for the spirit and generosity of the times.
The irony is that he said he remembered this episode when we met again in Toronto in ’01. Or at least, he gave that impression. Instant recognition, instant smile. I remember also how he pronounced my first name in that Cockney or East London accent of his — sounded a little bit like “jayfe.”