I’ve been waiting for the right thought or angle with which to jump into the Scooter Libby thing. A pretty good one hit me yesterday — i.e., that Bush’s commutation of Libby’s prison sentence provides a perfect third-act climax to Warner Bros.’s Valerie Plame/Joe Wilson project, which Akiva Goldsman and Jerry and Janet Zucker are producing — but then Sasha Stone beat me to it. (I haven’t found any links, however, to support her notion that Sydney Pollack is involved.) 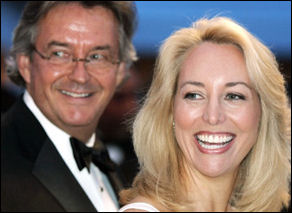 In any event, here’s another one: Jez and John Butterworth, the guys writing the Plame-Wilson screenplay, need to finish their work quickly so the movie can shoot as soon as possible. The increasing velocity and high-volume turnover rate means that the voltage on this story will be dropping off sooner rather than later. The producers are dreaming if think they can take their time with this thing. If it’s not out by, say, the end of ’08, forget it.
Plame was outed by Robert Novak as a CIA agent in July 2003 — how many years does Hollywood need to throw a film together on an evolving news-topic movie? The Watergate break-in happened in June 1972, and Robert Redford got All The President’s Men onto screens by the summer of ’76 — four years from start to finish. If the Plame-Wilson movie hits screens by late ’08, it will have taken five and a half years after the inciting incident. Somebody or something is dragging ass.
Oh, and I still say Tom Hanks as Wilson and Robin Wright Penn as Plame.