Last October 15th a Charles Lyons piece appeared in the N.Y. Times about Marina Zenovich‘s documentary about the great Roman Polanski. I ran a shout-out and followup that same day. The Lyons article described Zenovich’s film as “untitled and unfinished,” but the timing of it, as I noted, indicated “a possible debut at [the 2007] Sundance Film Festival and some kind of commercial exposure in ’07.” 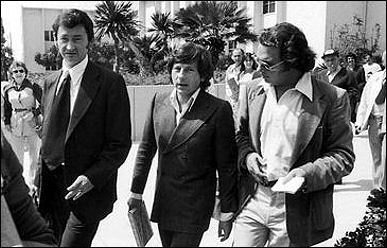 Sundance never happened, and a commercial opening is now an ’08 prospect, at best. But it’s been nine months since the Lyons’ piece so something must have happened. Zenovich didn’t respond to a call and an e-mail but Lyons got back. He says “she isn’t locked on the film yet– as it turns out, she never would have been ready for Sundance ’07. I’m not sure if she’ll even be ready for Toronto, were that a possibility.” I’m given to understand from another party that a booking at Sundance ’08 is “tacitly firm.”
Zenovich will, of course, have to include footage of Polanski’s Cannes press conference tirade against the banal questions being asked by journos.