Battle for Haditha director-writer Nick Broomfield speaking this afternoon from Berlin (where he’s doing the final mix) about this partly improvised au natural drama that uses various points of view to tell the story of the massacre of 24 men, women and children in Haditha, Iraq, in November 2005, by four U.S. Marines in retaliation for the death of a U.S. Marine killed by a roadside bomb. 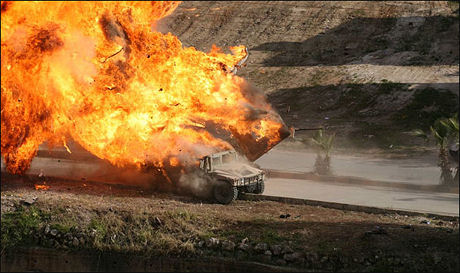 Filmed in Jordan around the same time that Brian DePalma was shooting Redacted, Battle for Haditha will have its world premiere at next month’s Toronto Film Festival. It will open in England in October, says Broomfield, and, he expects, probably in U.S. theatres before the end of the year.

“I thought it would be interesting to do a film about the Iraq War, but also to do something that reflects quite a complex story, where you couldnÃ¢â‚¬â„¢t just choose an easy side,” Broomfield told the London Times‘ Catherine Phillip last May. “And Haditha is a compelling story. There are lots and lots of Hadithas in any war. When you throw together people of different cultures, different outlooks, no language in common, these things happen.”

Blue-chip restoration guru Robert Harris has been working on a photo-chemical restoration of all three Godfather films for the last few months, and the results may be digitally viewable as soon as December (a Danish DVD site is stating that restored DVDs of the first two Godfather pics are due for release on 12.6.07). Harris declined comment, but Francis Coppola said after an 8.6 Godfather III screening at the Academy’s Samuel Goldwyn theatre that Steven Spielberg is the restoration project’s financial savior.

Coppola said that Paramount was initially not interested in funding the restoration (deemed necessary due to the original negative having been “purposefuly damaged by idiots…misued, cut up”) but all that changed when Spielberg stepped into the breach and said, “This is going to happen.”

According to an 8.18 posting by “Adam S.” on a Godfather restoration discussion at Home Theatre Forum, “Coppola showed up on Monday August 6th, after a screening of Godfather III at the Academy’s Samuel Goldwyn theater. He didn’t arrive until about an hour into a six person q & a with a variety of people in or attached to the film. He said it was a bit surreal to be there after we’ve been watching Godfather III because he had just come from the first viewing of the new restoration of the original Godfather, which he said ‘it looks ‘incredible.’

“Coppola also mentioned that the negative was basically going to dissolve, or very close to complete loss and it would have cost millions of dollars to restore. Paramount was not going to foot the bill for it, he said, but that after Paramount became Dreamamount Spielberg himself made sure they knew they had to restore The Godfather, and the restoration went forward. [But] there was absolutely no mention of a DVD release.” 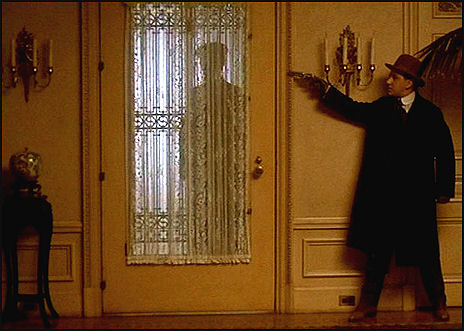 I called Paramount Home Video’s Brenda Ciccone on Friday afternoon to learn what I could learn, but the whole lot is taking Friday afternoons off during the summer — a Brad Grey idea.

Paramount management was probably taking the view that the film was fine as long as it existed in good digital form, but any responsible archivist will tell you that photo-chemical film elements have to be restored and preserved because they comprise the core elements in their original state — the actual “film” in its pure and most pristine form — and that these elements will enable home-video technicians to deliver top-grade transfers in the decades to come as well as ensure the film’s general future survival.

I for one would love to one day see a mint-condition chronological Godfather Saga with all those deleted scenes that were shown on broadcast TV in the late ’70s. But with the remastering of both films, this seems like a perfect opportunity to also remaster all the deleted scenes and put the big saga on DVD as a stand-alone separate release.

The Toronto Globe and Mail‘s Guy Dixon on the likely actor- celebrity attendees at the Toronto Film Festival, which won’t be confirmed until the official announcement about everything is posted online on Wednesday, 8.22.

There was a screening the other night at Raleigh Studios — the Fairbanks room — of an anamorphic (2.35 to 1) film, except that it started without an anamorphic lens attached, hence the image was horizontally compressed with an aspect ratio of 1.85. I spotted this within a few seconds, of course, and ran out and told the guy in the projection booth, who quickly found another guy who ran into the booth and went “oh, Jesus” and screwed on the right lens and then popped in the right aperture plate.

But the first couple of minutes were screwed up as a result and the delicate starting-off vibe was shattered. I was a projectionist in Connecticut in the late ’70s, and I’m presuming this happened because someone didn’t put the right instructions on the film-can labels that always tell the projectionist which lens to use, and what aperture plate to use, and what the correct aspect ratio should be. Crap happens and life is imperfect, but it went further than that.

The lamp being used for the projector didn’t have enough candle power (i.e., foot lamberts). The careful lighting in the darkish, shadowy scenes in the film we were watching — captured by an absolutely first-rate dp — wasn’t well represented. I’d seen the film once before, and the beautiful values I saw simply weren’t there. The shadowed elements looked murky, muddy.

And the the focus wasn’t even 100%. It was okay, maybe 85% or 90% satisfactory, but I was saying “this isn’t good enough” to myself over and over. I was imagining the filmmakers going to all kinds of trouble to light these scenes just so and then making sure the final master looks exactly right in post, and then a few months later some media people go to see their film at Raleigh and they encounter projection that diminishes all that effort by a good 15% or 20%.

This is obviously not about the film that was shown (which I’m not going to disclose), but about an absolute need for the very highest projection standards for media and industry screenings.

Finally got hold of Nick Broomfield‘s British cell, called him this morning to talk about Battle for Haditha, he said he was just getting on a plane for Berlin and to call back when he arrives.

Discerning moviegoers of both genders are probably down with the idea of Scarlet Johansson playing a pilates instructor and would-be singer who has an affair with a married guy in Ken Kwapis‘s He’s Just Not That Into You, and the jelly-bellied fanboys will most likely want to catch her as an enticingly-clad femme fatale in Frank Miller‘s The Spirit (technical title: Will Eisner’s The Spirit). 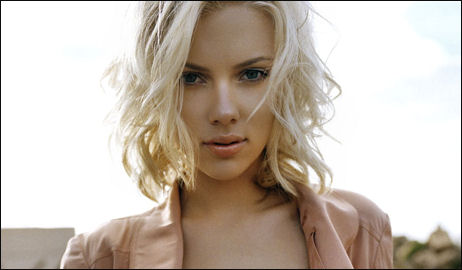 But however The Other Boleyn Girl and Mary, Queen of Scots turn out as films, the odds are that Johansson will not be regarded as a radiant asset in either one. To play powerful period women you need that RADA (Royal Acdademy of Dramatic Arts) thing going on, and Johansson is absolutely lacking that pedigree. Period pieces work against her natural chemical leanings, or vice versa. The Girl in the Pearl Earring was all about her slightly parted lips, and nobody I know bought her in The Black Dahlia or The Prestige. 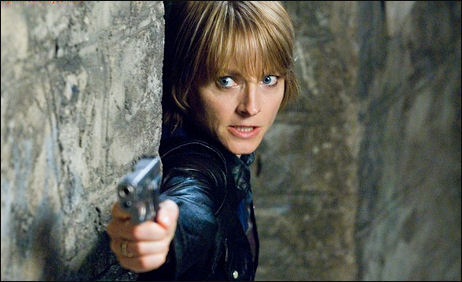 Superbad (Sony) will do much, much better than expected this weekend. Depending on who you listen to, the classic Greg Mottola-Judd Apatow-Seth Rogen-Evan Goldberg-Michael Cera- Jonah Hill-Christopher Mintz-Plasse-Bill Hader comedy will either pull in a projected $33,607,000 (about $11,400,000 was earned on Friday) or an estimated $30,300,000.

Sony’s own modest projection had been in the $25 million range, which is what I was hearing also. Fantasy Moguls’ Steve Mason was a little closer to the mark by predicting $27 million and change.

The other big news is that the fifth-place The Invasion, which opened this weekend, won’t even take in the projected best-case-scenario $10 million. One studio estimate has it topping out at $5,350,000 or about $1500 per theatre for the weekend. Steve Mason has it earning $5.7 million for the weekend. They might have done a little better — who knows? — if they’d just left the Oliver HIirschbiegel version alone and released. This movie had “wipe-out” painted on its forehead for a long time, but a failure of this dimension won’t do much for Nicole Kidman‘s quote. “She doesn’t sell tickets,” my marketing guy says.

Rush Hour 3 (New Line) will drop a bit more than 60% for the weekend, with estimates ranging between $16. 2million abd $18 million, give or take.

I can let the rest go for now. (Robert Mitchum in Out of the Past: “I can let it all go.”) Read Mason’s account if you want to know how every last little film did.