I think I can honestly say without qualification that I am officially past the point where I can watch another biopic about a charismatic but self-destructive artist (Talk To Me, La Vie en Rose, El Cantante, Walk The Line, Ray, Who is Harry Nilsson and Why Is Everyone Talking About Him?, Great Balls of Fire, Bird, The Doors, A Face in the Crowd) with any kind of receptive, open-pore attitude. 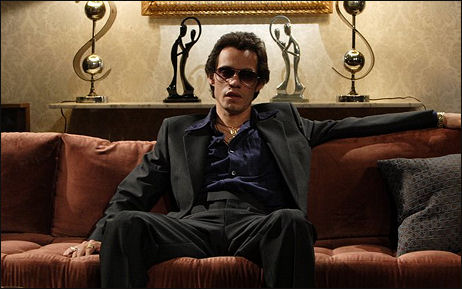 To judge by these and other biopics (the latest of which is the critically savaged El Cantante) the vast majority of all major pop artists seem to have lived the exact same lives and grappled with the exact same substance-abuse problems, and I’m just sick to death of this same damn story being told over and over.
That doesn’t mean I’m suddenly now open to Disney-produced, G-rated biopics about artists with sunny attitudes with families and friends that love them without exception. I know what artists are like for the most part, and that the better ones are always grappling with doubts and demons of one sort or another. As an HE reader wrote last year in response to my review of the John Scheinfeld‘s Harry Nilsson doc, “The third act of any artist’s life always sucks.” It’s just that I’ve seen too many of these downward-swirl stories, and I can’t watch any more without making cracks at the screen.
Andrew Sarris had a similiar end-of-the-line experience with the films of Jean- Luc Godard, he once told me. It was sometime in the early ’70s, as I recall, when he explained to New York Film Festival director Richard Roud that he was off the Godard boat. We all reach these points, I think. Wait…this is a thread. What genres, stories and filmmakers have you had it up to here with and can no longer tolerate?