What is with big muscular black guys and their affection for angry snarly dogs that bite, gouge and kill each other in illegal dogfight rings, and sometimes kill the occasional human? Last week Atlanta Falcons quarterback Michael Vick was busted for owning several snarling attack dogs for the purpose of putting them in fight-to-the-death dog battles, and last Friday Ving Rhames stepped into it when two of his dogs (possibly a pair of Fila Brasileiro mastiffs) killed a 40 year-old housekeeper. 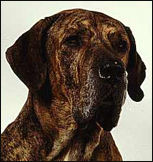 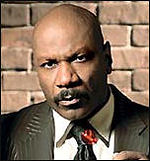 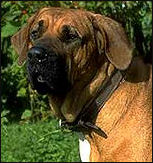 Rhames wasn’t around when it happened, but who owns dogs with that kind of temperament and potential? It has something to do with a belligerent macho attitude, and I think it’s despicable. Those dogs should be strung up or put before a firing squad. And I were a producer, I’d try to find an excuse not to hire Rhames the next time I need to cast a guy like him. What a brute. According to an MSNBC report, Rhames “bragged” to Time magazine in 2001 that he owned “eight Fila Brasileiro mastiffs — the national dog of Brazil, also used by U.S. Marines in jungle warfare.”
We all know that the dog we own is the person we are deep down. We all laughed when George C. Scott‘s Patton bought “Willie,” the ugly white bull terrier with the pink eyes, because we saw the resemblance. My favorite dogs are love dogs — golden retrievers, in particular, because they’re into hugging and making out and licking your hands and snuggling. I’m also partial to collies and golden labs.