Beatty and the sound of cannons

Another looking-back-on-Bonnie and Clyde-40-years-later piece? This one being from London (i.e., the Guardian‘s Philip French), it reminds me of Warren Beattys’ story of a London freakout he experienced with this film, and how it all began with his wanting the Bonnie and Clyde gunfire to have a cannon-roar sound like the guns in Shane, and how Beatty gone to director George Stevens and asked him how to create the exact same sound. 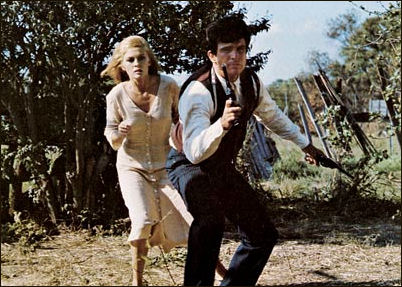 Flash forward to the the film’s late-1967 premiere in London (at a prime theatre in Leicester Square), and Beatty noticing that the gunfire sounded soft and muffled.

Enraged, Beatty runs upstairs to the projection booth to see what’s up. The projectionist, surprised to see Beatty, tells him that he ran Bonnie and Clyde earlier that afternoon and realized it had an atrocious sound mix, especially regarding the gunfire. So he did Beatty a favor by making up a time chart telling him at what exact points to turn down the sound as the gunfire wouldn’t sound so cannon-like. “This is one of the worst mixed films I’ve ever seen,” the guy said . “In fact, I haven’t seen a film mixed this badly since Shane.”