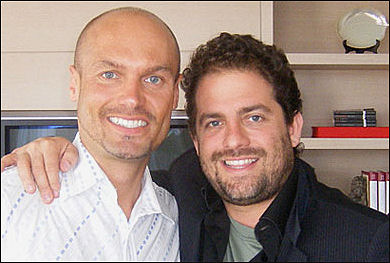 “My first blow job was from a man, but I didn’t know it was a man,” Ratner explains. This incident, he says, is where a Rush Hour 3 scenes comes from when a hot girl who’s getting down with Chris Tucker takes off her wig, which angers Tucker and leads to his accusing her of being a man. “It comes from personal experience,” says Ratner. “It happens to a lot of people.”
I admire this kind of candor. It’s ballsy. I know a lot of guys who would be horrified to admit even to themselves that they were unwittingly blown by a tranny, much less to the world.
If L.A. Weekly critic Scott Foundas is fast on his feet, he’ll insert a parenthetical in his just-up Ratner profile as follows (wth the suggested parenthetical in boldface): “It matters to Ratner that his films seem expressive of his personality,” and that this is evident “perhaps most of all in the Rush Hour movies…in the preponderance of classic r & b and hip-hop on their soundtracks; in their exuberant celebrations of beautiful women (or men possibly pretending to be same), fast cars and other assorted bling; and in their conscious homages to the movies that made Ratner want to become a director in the first place.”
My favorite comment in the Foundas piece about Ratner’s sexual attitudes and experiences comes from director James Toback, to wit: “There are certain people who can get away with a reputation for flirtation and running around — the paradigm being George Clooney. But very few directors can get away with that, and most of them are cagey enough to conceal what they’re really doing.
“I think that just to enjoy a single life as Brett does is a serious detriment to being taken seriously. It’s as if to be sexually curious and freewheeling implies some form of retardation instead of some form of advanced or enlightened consciousness, which is what it just as often is.”