It’s no secret that Nick Broomfield‘s Battle for Haditha, slated to show at the Toronto Film Festival, is a dramatization of an actual event — the massacre of 24 men, women and children in Haditha, Iraq, in November 2005, by four U.S. Marines in retaliation for the death of a U.S. Marine killed by a roadside bomb — and not a documentary, but it can’t hurt to point this out again.

The Haditha killings were apparently payback for an attack on a convoy of United States Marines with an improvised explosive device IED) that killed Lance Corporal Miguel Terrazas.

The My Lai-type story was broken by Time‘s Tim McGirk on 3.19.06. Pennsyl- vania Congressman John Murtha raised hell about it starting in May ’06. (“Who covered it up, why did they cover it up, why did they wait so long?” Murtha said that month on This Week on ABC. “We don’t know how far it goes. It goes right up the chain of command.”) 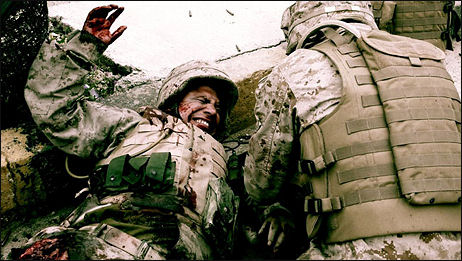 There’s some uncertain mucky-muck involving the provable prosecutions of those involved, or whether or not certain soldiers were unfairly dragged into this. The right-wing nutters (including Sean Hannity) are portraying McGirk and Murtha in very negative ways — one has even compared the prosecution of the guys who took part in the shootings to the situation in Stanley Kubrick‘s Paths of Glory. (Which seems ridiculous to me.)

The movie apparently follows the story from the point of view of the Marines of Kilo Company, one or two Iraqi families, some female non-combatants, and the insurgents who plant the roadside bomb. As such The Battle for Haditha is certain to be compared to Brian DePalma‘s Redacted — another varied-points-of-view look at a single Iraq War incident — after they’re both seen in Toronto.

HanWay Films is listed on the IMDB as the distributor, but right now there’s no release date — it might be out before the year, depending on the Toronto reaction, and to go by the trailer I’m thinking it should be.

I tried to reach Broomfield this morning and the clock is ticking. He apparently shot Haditha (pronounced “Ha-dee-tha”) without a hard script — he worked from an outline of each scene and where the story was going, and then the actors would then improvise their way through it.