Anton Corbijn‘s Control (Weinstein Co., 10.10), the sad but visually arresting story of doomed Joy Division singer Ian Curtis, is less than eight weeks from opening in this country, and there’s still no full-on website to support it. Whassup with that? This is one of the best films of the year so far, and the cost of creating a tight, attractive, professional-level website with all the right bells and whistles is relatively small. If you know how to work it, that is. 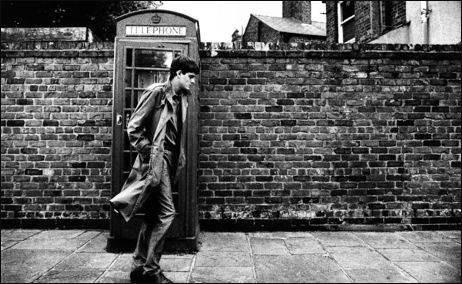 All the Weinstein Co. has put up is a single information page with a synopsis, a photo of star Sam Riley (who gives one of the year’s most arresting lead performances, no question) and a little blah-dee-blah about Curtis and Joy Division and yaddah-yaddah.
The Weinstein site doesn’t even feature a link up to this new Control trailer, which is now sitting on a My Space page.
“The mark of any exceptional film is the won’t-go-away factor,” I wrote just after seeing it last May at the Cannes Film Festival. “A film that doesn’t just linger in your head but seems to throb and dance around inside it, gaining a little more every time you re-reflect. This is very much the case with Anton Corbijn‘s Control, the black-and-white biopic of doomed Joy Division singer Ian Curtis.
“I finally saw Control at a market screening last Wednesday night (5.23) at the Star cineplex, and it’s definitely one of the four or five best flicks I’ve seen at Cannes — a quiet, somber, immensely authentic-seeming portrayal of a gloomy poet-performer whom I didn’t personally relate to at all, but whose story I found affecting anyway.
“Corbijn, a music-video guy, was obviously the maestro, but a significant reason why so much of Control works is newcomer Sam Riley, who portrays Curtis as a guy who was unable to throw off that melancholy weight-of-the-world consciousness that heavy-cat artists always seem to be grappling with. There is no such thing as a gifted writer/painter/poet/sculptor/filmmaker who laughs for the sake of laughing and does a lot of shoulder-shrugging. Everything is personal, and everything hurts deep down. And Riley makes you feel what it’s like to be a guy who just can’t snap out of it.”
Again, check out the new trailer. It’s the best one I’ve seen so far, and I’ve been looking at Control-related stuff all summer.