Paul Willner has written a nicely descriptive L.A. Times piece about a special screening of William Friedkin‘s Cruising (1980) that was held Monday night at San Francisco’s Castro theatre. The screening was a promotion for a Cruising deluxe-edition DVD that Warner Home Video is bringing out out on 9.18.07. 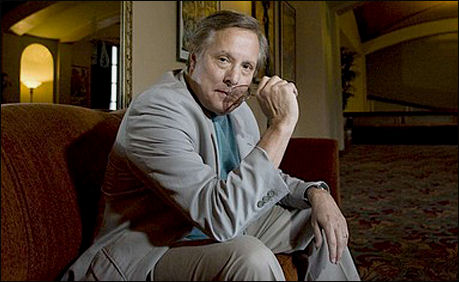 This once-controversial film was despised and protested against by hip Manhattan gays back in the day. They were angry that the film’s hunt-for-a-serial-killer story not only used the world of downtown Manhattan gay bars (and the anonymous sex that was routine in these places in the pre-AIDS era of the ’70s) as a backdrop, but as a creepy-atmospheric thing that suggested that guys who went to the Mine Shaft on weekends were flirting with an element that was on some level malevolent and not at all healthy.

27 years later, Friedkin is still saying stuff like (a) “I didn’t set out to make a movie that would be offensive to people [but] a murder mystery set against the backdrop of this particular milieu” and (b) “I could see why some people felt like it was not the way to put the best foot forward at the time, but I also felt I had the right to make a movie, not a political statement.”

Except he was making a kind of political statement, and Friedkin damn well knew this all along. if Cruising wasn’t fastidiously political it was obviously a cultural statement that said, “Eewww, look at what these leather-clad gay guys are doing with each other in skanky downtown bars…..eewwww! Amyl nitrates, fist-fucking, golden showers….how perverted is that? Is it any wonder that in a scene as dark and kinky as this that a serial killer — a guy in denial about latent gay tendencies, perhaps — might be attracted to the nocturnal intrigue and wander into it and start stabbing gay guys to death?” 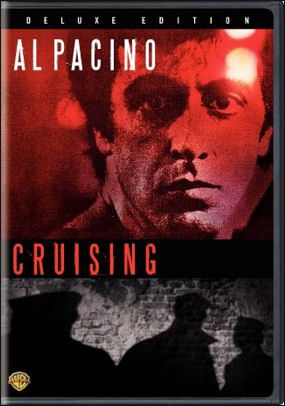 Cruising was a thriller first and foremost, but it was obviously a straight-male, straight-culture message flick that was going “tsk tsk” at an exotic culture. It was eyeballing something within the downtown gay-sex scene that, to some at least, seemed possibly self-destructive. The irony, of course, is that there was something self-destructive going on back then. If thousands of guys weren’t fucking each other left and right in backroom bars coast to coast, it’s certainly plausible that the AIDS virus might not have spread as quickly as it did.

The thing that always bothered me about Cruising was that the voices of the killer didn’t match. We hear (but don’t see) a shadowy baritone-voiced killer in the beginning, and then the killer is identified as Stuart Richards (Richard Cox) in Act Three and his voice is nowhere near as deep, and then we hear the voice of his father (i.e., the guy he’s really trying to kill) and it’s still not quite the same as the original baritone killer’s voice. I could never figure this out.

And I could never really figure the ending as far as Al Pacino‘s cop character was concerned. The film’s second-to-last shot is of his girlfriend (Karen Allen) trying on a gay-bar leather jacket and hat in their apartment, and the last shot is of a tug boat on the Hudson. Abrupt cut to black and mass confusion.

But I always liked Paul Sorvino‘s line to Pacino at the beginning, when he’s giving him his undercover assignment: “Have you ever been corn-holed?” And I remember that Pacino looked a little beefy in this film, and that I took to calling him “Porky Pacino” when I was discussing the film with friends.