Billy Wilder‘s Ace in the Hole, a very cynical 1951 drama about a hard-bitten reporter (Kirk Douglas) exploiting the life-and-death situation of a trapped miner, came out on a long-awaited Criterion DVD on July 17th, and then 20 days later — last Monday, 8.6 — a cave-in trapped six miners inside a Utah mine, and within hours the media descended and began delivering the same kind of ticking-clock, hand-of-fate reports that Douglas and a horde of newsmen filed in the Wilder film…odd. 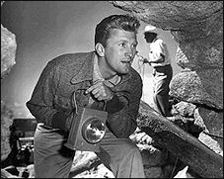 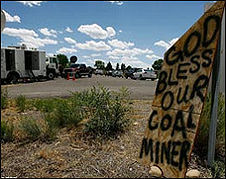 One thing reporters have learned since the 1920s (when the original trapped-miner incident that inspired the Wilder film occured) is to show heart and empathy, and there’s certainly been plenty of that coming out of Utah over the last five days.
Sadly, the real-life survival situation is starting to show similarities between the fate of the single trapped miner in Ace in the Hole as well as those radio reports about a little girl trapped in a hole in Woody Allen‘s Radio Days. “A tiny microphone lowered deep into the earth early Friday picked up no evidence that six coal miners are alive four days after they were caught in a cave-in,” a N.Y. Times story reported an hour or so ago. And while “an air sample indicated enough oxygen to breathe was present in the chamber where the miners are believed to be trapped, it also did not pick up carbon dioxide, the gas exhaled when people breathe.”