I spoke yesterday with Santa Barbara Film Festival director Roger Durling about In The Valley of Elah (Warner Independent, 9.14), about which he said he was “emotionally moved” and “doing somersaults over it,” and that “it’s going to shake people to the core.” What got me were the comparisons Durling noted between Tommy Lee Jones‘ performance as Hank Deerfield, a grief-wracked ex-military cop with a subdued and taciturn manner, and John Wayne‘s as gruff and blustery Ethan Edwards in John Ford‘s The Searchers. 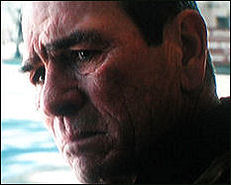 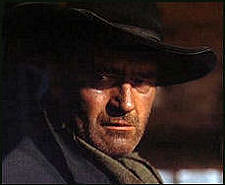 Tommy Lee Jones in In The Valley of Elah, John Wayne in The Searchers

Neither performance has an emotional geyser moment. Deerfield and Edwards are both about “holding it in” at all costs, and yet both actors allow their characters’ feelings to seep out in just the right way. They’re both old-school tough guys, of course, and are both looking to find a disappeared family member. Jones’ character isn’t a racist like Edwards but he’s got something else eating at him — a notion that if he’d listened to his son a bit more a certain bad thing might not have happened. Wayne was this all-American iconic figure playing a complex man with a dark undercurrent, and Jones is playing a retired straight-arrow career solder who comes to question what in the name of hell has been going on in Iraq — not in a political way but in terms of the human cost.
Different guys, different performances…but clearly sharing all kinds of cross echoes. Both former military men dealing with the question of “how do soldiers who’ve just come out of a conflict fit into society, if at all?”