I spoke yesterday with Jeff Garlin, the director, writer and star of I Want Someone to Eat Cheese With (IFC First Take), which finally opens limited on 9.5.07. “Finally” because fans of this film — an agreeably witty and poignant character comedy in the general vein of Paddy Chayefsky‘s Marty — have been waiting to see it in theatres since it played and scored at the 2006 Tribeca Film Festival, about 16 months ago. 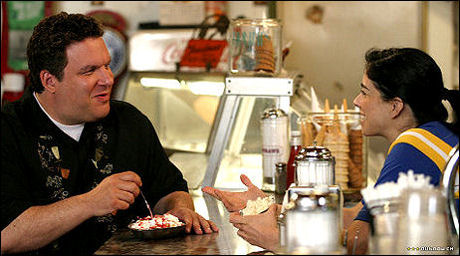 After catching it a couple of months later at at the L.A. Film Festival I called Garlins’ film “a Big Fat Greek Wedding for witty fat guys, only without the wedding or the slobbery cattle-yard relatives.”

It’s a sharply written (here and there genius-level) comedy-drama about a witty, likably humble Chicago comedian named James (Garlin) who lives with his mom but badly wants a soulmate girlfriend. Vaguely fortyish, James is saddled with a yen for slurping down junk food late at night (which costs him in the romantic department), and he’s pretty good at getting shot down or turned down or fired.

But as gloomy as James sometimes gets (and for good reason), he’s tenacious in a shuffling, good-natured, comme ci comme ca way, and you can’t help but feel for the guy and want him to succeed.

Director-producer-writer Garlin — best known for his ongoing role as Larry David’s manager in HBO’s Curb Your Enthusiasm — and his fellow performers (Bonnie Hunt, Sarah Silverman and a team of Chicago-based actor pals) are all top-notch. And in an unassuming little-movie way with the emphasis on spirit and tone and quirky-hip humor, Cheese works.

One thing: The fact that there’s no Cheese website doesn’t exactly help matters. IFC and Weinstein almost never pay for websites, but Garlin does pretty well and lives a fairly flush life, so he could obviously afford to pay for it himself….but he hasn’t. He could get a decent site designed and launched for less than $10 grand. If you the reader had a good little film you’d made and nourished and brought along step by step, wouldn’t you make sure it had a website one way or another? I sure as shit would.