The only thing wrong with this generally first-rate trailer for Peter Berg‘s The Kingdom (Universal, 9.28) is a single line of narration — spoken by some Don La Fontaine-y sounding guy and also printed on-screen. There’s also a curiously “off” image of Jennifer Garner on the right side of the ad art. Take a close look below and tell me she looks like Garner. Because she looks like…I don’t know, 20% Garner and 80% Mandy Moore? 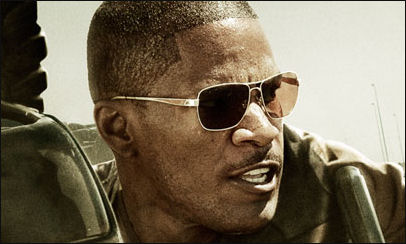 The Kingdom, which I saw three or four weeks ago, is about a team of crack FBI investigators (Jamie Foxx, Chris Cooper, Garner, etc.) sent to Saudi Arabia to explore the specifics behind an explosion that has killed several Americans inside a Riyadh residential compound. The problem with the narration is that it says that “they have come to catch a killer.” At no point in The Kingdom does anyone hypothesize, much less suspect, that there’s a single guy behind the bombing. Never…not for a second.
The idea of a lone nut killing anyone in that area of the world is ludicrous — every American death, every IED, every sniper shot from the top of a building is a group effort. The Middle East arena isn’t about “find the lone psycho” — it’s about “how do we stop thousands of psycho Islamic jihadists from wanting to shove a spear into the chest of the Great Satan?” But the Universal ad person who wrote the copy said to himself, “Fuck that…it sounds cooler if they’r’e trying to catch a lone killer than a hundred wackos. Screw it…let’s make it sound like it might be The Silence of the Riyadh Lambs.” 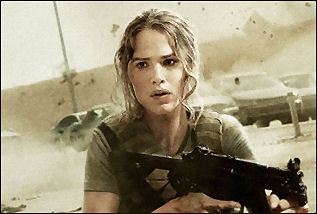 What The Kingdom really is, when you break it down and take off the sunglasses, is an episode of CSI: Riyadh with a totally riveting third-act that recalls the trapped-diplomat-ambush scene in Clear and Present Danger…in part. There’s a lot more hide-and-seek, shoot-and-run energy besides this. It’s real fine stuff, but first you have to get through those first two acts, which are…well, fine. By this I mean that they’re acceptable, moderately satisfying, engaging as far as they go, no significant potholes.