Kubrick and the muck

Charles Mudede, a dispenser of tight, clean sentences and un-minced thoughts, has written a short unambiguous piece for The Stranger, “Seattle’s only newspaper,” about what a misanthropic hard-case Stanley Kubrick was. 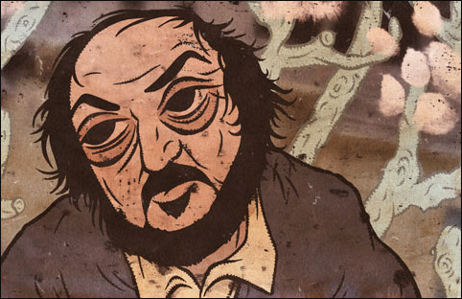 “Kubrick hated humans,” Mudede begins. “This hate for his own kind is the ground upon which his cinema stands. As is made apparent by 2001: A Space Odyssey, his contempt was deep.

“It went from the elegant surface of our space-faring civilization down, down, down to the bottom of our natures, the muck and mud of our animal instincts, our ape bodies, our hair, guts, hunger, and grunts. No matter how far we go into the future, into space, toward the stars, we will never break with our first and violent world. Even the robots we create, our marvelous machines, are limited (and undone) by our human emotions, pressures, primitive drives. For Kubrick, we have never been modern.

“‘I’m in a world of shit,’ says Private Joker at the end of Kubrick’s unremittingly dark Vietnam War film, Full Metal Jacket. That is what Kubrick has to say about the state of everything: The world is shit, humans are shit in shit, life is worth shit, and there is nothing else that can be done about the situation. In Kubrick’s movies, progress, sustained enlightenment, and moral improvement are impossible because the powers of reason, love, and religion are much weaker than the forces of generation and degeneration, desire and destruction, sex and death.”

Kirk Douglas, who worked with Kubrick on Paths of Glory and Spartacus, once described him as “Stanley the prick.” He wasn’t referring to the misanthropy, and he conveyed this opinion with a smirk. But I’ve never forgotten the moment when he said this, which was late in the afternoon as we stood outside Elaine’s sometime in the late summer of 1982, just as a Bobby Zarem press party for Eddie Macon’s Run, in which Douglas costarred, was breaking up.