The high-def trailer for Robert Redford‘s Lions for Lambs (MGM/UA, 11.9). Three story threads — a California professor (Redford) and his students (Derek Luke, Michael Pena, and then later on Andrew Garfield), a high-powered Senator (Tom Cruise) and a journalist (Meryl Streep), and Redford’s two earlier students (Luke, Pena) slugging it out in Afghanistan. 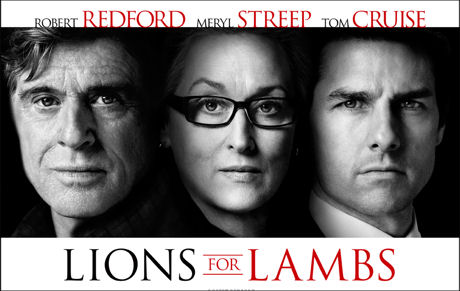 How come we haven’t heard about this very-much-of-the-moment, headline-reflecting drama going to the Toronto Film Festival? Let me guess. The view is that it’s a major stand-alone film that will only be devalued by taking part in a huge, high-toned clusterfuck like Toronto. Or Redford, Cruise and Streep are considered too important to take part in a clusterfuck. Or someone is thinking that a soldiers-in-Afghanistan film vs. two Iraq films (In The Valley of Elah, Redacted) will make for one too many Middle Eastern conflict movies, especially at a film festival commonly regarded as a clusterfuck.