Lebowskifest, the book, the fans

I’m a Lebowski, You’re a Lebowski, a new fan book aimed at the amiable, libation-enjoying, somewhat ADD-afflicted fan base and written by Bill Green, Ben Peskoe, Scott Shuffitt and Will Russell, will hit stores on Tuesday, 8.21. And on 10.12.07, the two-day L.A. Lebowskifest kicks off at the Knitting Factory and wraps at some blue-collar bowling alley in Carson the following night. (Tickets will go on sale tomorrow at 1 pm via Ticket Web.) 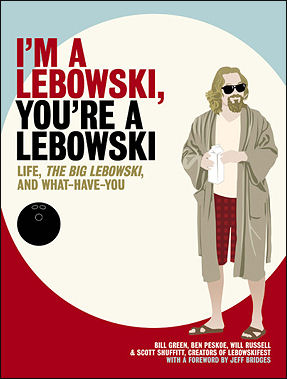 I’ve never gone to a Lebowskifest adnhave never so much as sipped a White Russian, but I’d like to attend the October thing. There are some who look upon the culture with a certain disdain or distaste. Steve Buscemi (“Donny”) has gone on record as saying he would never fraternize with Lebowskifest types, and I’m fairly certain Philip Seymour Hoffman has never attended either. Very bright fellows, these two, but…well, they are who they are.

An mp3 clip from the film, recorded this morning, and an HE Lebowskifest piece than ran in early ’05.

Which reminds me — where are the documentaries about the Lebowski culture? I was told two and a half years ago about three — one that was being worked on by “a couple named Robin and Rose Roman,” another by “a guy named John Nee, who has an outfit called Idiot Works and who also works for Adam Sandler‘s Happy Madison production company” and a third that was called Over the Line, directed by an L.A. guy named Eddie Chung.

August 16, 2007by Jeffrey Wells35 Comments
« Previous post
“Days of Heaven” on Criterion
Next post »
Tracks from “I’m Not There”