The initial assumption was that the Farrelly Brothers‘ version of The Heartbreak Kid (Dreamamount, 10.5), which costars Ben Stiller and Michelle Monaghan, is a remake of Elaine May‘s The Heartbreak Kid, which came out 35 years ago with Charles Grodin and Cybil Shepard in the leads. It is that, of course, but there are indications that it may be a much coarser and more slapsticky thing than May’s film, and with fewer mixed-bag subtleties in terms of the characters. 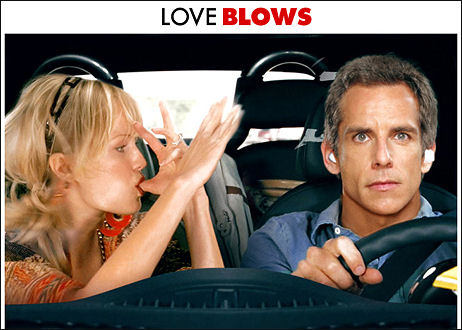 The self-absorption in Grodin’s character was fairly deranged (he sees women primarily as challenges, and begins to disengage once he’s won them over and/or possessed them), and the New York-area Jewish girl he marries at the beginning (Jeannie Berlin) is grating and inelegant but at least half sympathetic — the scene in which Grodin drops her in a Miami Beach restaurant is somewhere between sad and grotesque. Stiller’s guy, on the other hand, is said to be more likable and less looney tunes, and the woman he marries early on (Malin Aker- man) is portrayed as a batshit caricature of someone you’d definitely want to un-marry as soon as possible.
In this sense the new Kid seems to bear a slight resemblance to Jeff Franklin‘s Love Stinks, a 1999 comedy about a guy who gets caught up with a gold digger from hell. The connection is obviously being telegraphed by the Heartbreak Kid marketing guys with their slogan — “Love Blows.” 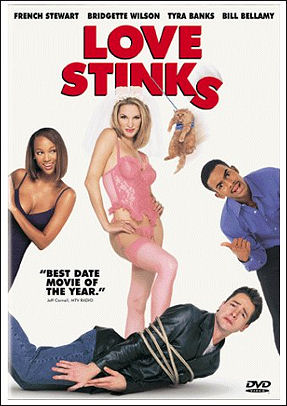 I haven’t seen the film and it may be fine on its own terms, but if the what I’m hearing and reading turns out to be true then c’est la guerre — that’s how things are. The ’70s were the ’70s and now is right now. Just because a character comedy directed by one of the smartest and most sophisticated female comedy auteurs (working from a script by Neil Simon) of all time worked on its own terms back then doesn’t mean it’ll work by today’s standards. You have to gorilla things down today…make something that the Seth Rogen crowd will laugh at. The Elaine May-Charles Grodin comic aesthetic is way too fussy and neurotic and smarty-pants. Let it go, move on.