I sat down for lunch yesterday with Shoot ‘Em Up director-writer Michael Davis, and the restaurant — the Boulevard Lounge at the Beverly Wilshire hotel — was so clattery and wallah-wallah that my Olympus digital recorder was overwhelmed. (I’m constitutionally incapable of buying one of those clip-mikes that discriminates against ambient noise.) But at least I got a free lunch out of it, and a chance to talk again with Davis — a genuinely nice guy, and a Steven Spielberg look-alike if I ever saw one — about the whole up-and-down. 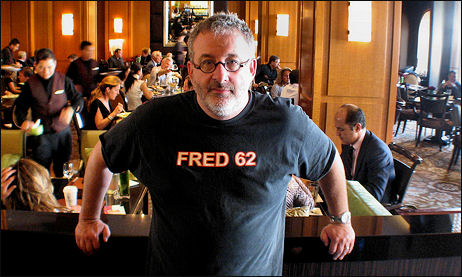 Listen to clip #1, clip #2 and clip #3 if you want, but they’re a chore. I can’t think of anything all that new to say about Davis or the film. I wrote two years ago about his background and how get came to direct Shoot “Em Up, and I’ve raved about the film — “a brilliant, ultra-violent Buster Keaton comedy.” Maybe a new thought is preparing to push through or maybe that’s all she wrote. 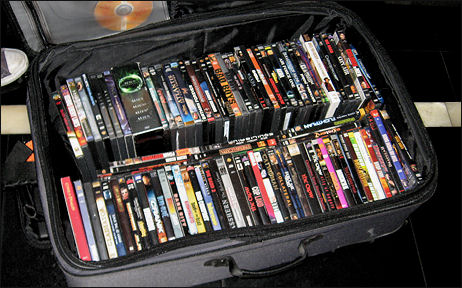 Davis’s most impassioned statement was to bring a suitcase full of action-movie DVDs in order to prove his devotion to the genre and to disprove my opinion, expressed in this 8.11 review, that “there isn’t a single drop of sincerity in Shoot ‘Em Up” and that Davis’s “basic attitude is one of laughing derision for the whole Woo-aping circus.” Okay, all right — he’s a genuine action-movie fan but I didn’t feel this when I watched Shoot “Em Up, which is one reason why I enjoyed the film as much as I did. I still say “never trust the artist — trust the tale.”