I was reminded after seeing the B’way revival of Sweeney Todd last year (the one with Patti Lupone as Mrs. Lovett) what a great uptown show it is — great Lupone, magnificent staging, a beautiful Stephen Sondheim score, sad-tragic theme. And then I asked myself, how would this musical play with Helena Bonham Carter in the Lovett role (which was first created by a magnificent Angela Lansbury) in a feverishly Tim Burton -ized film adaptation? (I’m being told Bonham-Carter does her own singing, which sounds problematic.) 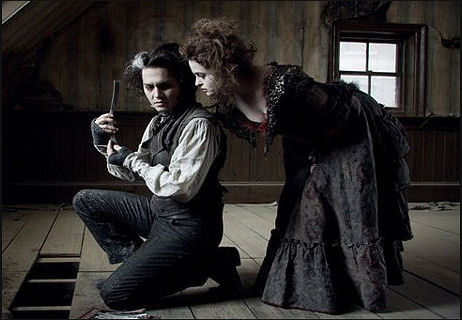 Sweeney Todd is a very high-end thing full of operatic passion, but deep down it’s a chilly-atmosphere piece about a revenge-obsessed, throat-slitting barber (read the Wikipedia synopsis). This obviously makes it a different animal than your standard rube musical (i.e., Mamma Mia, Hairspray, Jersey Boys, etc.) that tends to play best with the people who go to movies just looking for tasty popcorn and a good time.

And I’m wondering in this context what the decision to break Burton’s Sweeney Todd wide on 12.21 really means. WB execs are obviously betting they can make more money with a faster limited-wide break (1500 screens) that sells the Sweeney sizzle rather than a gradual roll-out that promises quality and prestige and leans upon word-of-mouth.

McLintock has written that Burton and Sweeney producer Dick Zanuck already had been pushing for a wide bow, expressing concerns that a platform release could give the impression it was an arthouse title.

The whole grand guignol arterial-spurt element will almost certainly feed the fire of Burton’s love for precise and ultra-luscious visual composition. You know Burton — he’s going to go for the oozey-ness of Sweeney Todd and then some. This seems to support the statement by McLintock that Sweeney Todd is “expected to receive an R rating.”

But there’s also an alleged Daily Mail story (can’t find the original link) that’s been quoted on slashfilm.com, saying that the powers-that-be want Burton to “butcher” his own film. “Apparently the early footage from the film was so extremely bloody that the studio executives have become a tad squeamish and are requesting the film to be re-cut,” the story says.

“Tim’s not happy that the studio is asking for so many cuts to the cutting, as it were,” a source has allegedly told a Daily Mail reporter. “The thing is, the studio really likes the film and they want to make it accessible to as big an audience as possible,which means stemming the blood flow. But that’s a bit difficult for a story involving a guy who gets high slitting throats.”