Stories about the recent suicide deaths of writer Theresa Duncan (Tylenol and alcohol) and then her boyfriend Jeremy Blake (walking into the sea like Sterling Hayden did in The Long Goodbye) are all over the place. L.A. Fishbowl‘s Kate Coe has an L.A. Weekly story in this week’s issue, Chris Lee has an 8.3 story about the tragic duo in the L.A. Times, and Lee says in an online chat with Coe that Vanity Fair, the New Yorker, New York magazine and CNN’s Anderson Cooper are also preparing reports. 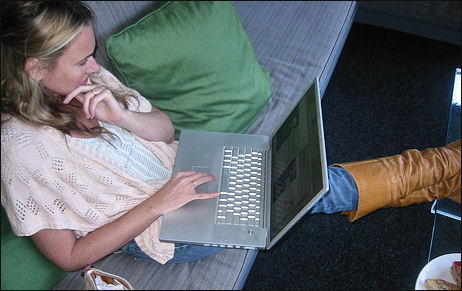 It therefore felt a bit creepy when by Awards Daily‘s Sasha Stone sent me a page of Duncan’s elegant blog (called “The Wit of the Staircase”), dated 2.21.06, that listed “Four Bloggers J’Adore” as follows: “1.Jorn Barger, 2. Lauren Cerand, 3. Jeff Wells, 4. Bad Feminist.” Flattering, okay, but this means there’s something about Hollywood Elsewhere that appeals to the mind of an obviously bright, attractive, 40 year-old woman who decided to off herself. I’m not sure I feel 100% great about this. There’s no romance or transportation in suicide. There is only ink, blackness …plug pulled.
Then Stone wrote once more and pointed out the existence of another guy named “Jeff Wells” whose site is called Rigorous Intuition. So never mind. (Sorry for calling it Rigorous Institution earlier, but a part of me automatically gravitated to that wording. Sound funnier, for one thing.)