Anne Thompson reported yesterday that Marc Forster‘s The Kite Runner (Paramount Vantage, 11.2), which is performed in Dari, and Julian Schnabel‘s The Diving Bell and the Butterfly (Miramax, 12.17), which is spoken entirely in French, will be ineligible for a Best Foreign Language Feature Oscar because they’re both considered “American productions with foreign elements.” 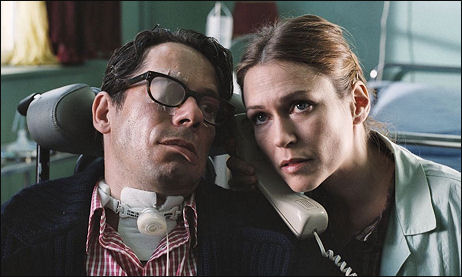 The totally immobile, left-eye-blinking, lip-drooping Mathieu Amalric in The Diving Bell and the Butterfly

I don’t know from the Forster (Thompson is hearing it’s “a crowd-pleaser” and a “tearjerker” but not necessarily “a critics’ picture”) but the Schnabel is, I feel, a non-starter because it boils down to being a beautifully rendered immersion into a state of total paralysis. Except the beautiful renderings are for naught because you’re still trapped in the mind and body of a real-life guy named Jean- Dominique Bauby (Mathieu Amalric), an Elle editor was left totally paralyzed in the early ’90s after suffering a massive stroke, unable to express himself except by blinking his left eye.
After seeing it in Cannes three months ago I called it “a passable attempt to render a beautiful, inwardly-directed portrait about what is truly essential and replenishing in life. But the film is neither of these things, and is nowhere close in terms of poetic resonance and emotional impact to Schnabel’s Before Night Falls (’00). It’s sensitively realized and skillfully made, but it’s a movie about a state of nearly 100% confinement that itself too often feels confining.
“I’m all for living and fighting until the last, but winking your way through an extremely restricted version of living tests the limits of this positivist philosophy.”