Back in the creaky old analog days of the ’90s, I used to rant about the “too much lead” syndrome in action movies and the occasional western. Bullets have to matter somewhat. Too many gunshots in a movie leads to a kind of fatigue in the soul, and even a kind of nausea. But nobody cared and the syndrome continued unabated. Too many guys and too many bullets going for the whammies. Except whammies are like jelly babies. Too many and you feel ill. I was in a state of almost permanent indigestion there for a while. 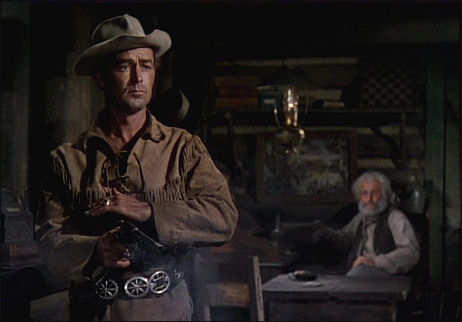 Then along came Unforgiven, a western that took the matter of death from gun shootings very seriously. Killing another human being is a horrible thing under any circumstance, and while we all understand that a certain ironic cinematic distance is necessary to deliver violent thrills in unserious genre films, the number of movies that have tried to absorb what it’s really like to cause or observe death at close range have been very few.
Which is why Clint Eastwood‘s Oscar-winner felt so refreshing. As with Shane, which has a total of ten shots fired (and five of these fired at a white rock on the ground) and the Mike Hodges version of Get Carter, the gunfire in Unforgiven was not only spare and select, but you could feel the hurt. The killings sank in.
This less-is-more aesthetic is pretty much out the window these days, of course. You have to blam-blam it fairly relentlessly or young guys will tell their friends that the other shoot-em-up movie is cooler. (Much in the way that twentysomething Roman guys in 100 A.D. probably compared the gladiator and wild-animal killings they’d seen in the Collisseum.) Caution, regret and thinking twice before you pick up a gun are for pussies.
If a violent film is a brilliant anarchic cartoon like Shoot ‘Em Up, then hundreds of gunshots is the satirical point and therefore not a problem. I can roll with cool gunplay as well as the next guy — “good” being the key term. For me “good” means “done carefully and within limits.” I also know that too much shooting is a turnoff. There are no hard and fast rules, but if there’s too much of it, you can always tell. A little voice says, “This is getting to be too much.” And then you start disengaging.
That said, there’s nothing like a much-desired death happening at the right time. There are a couple of real beauties in this respect from the hand of Russell Crowe in James Mangold‘s 3:10 to Yuma. I disliked the characters he dispatches, and when the moment finally comes…good stuff!
Is that a contradiction or what?