Ark of the warehouse

AICN’s Drew McWeeny posted a report this morning about the Indiana Jones and the Kingdom of the Crystal Skull crew having “built a reproduction of the warehouse from the end of Raiders of the Lost Ark somewhere in the town of Downey (a totally hellish suburb of L.A. principally known as the childhood home of Richard and Karen Carpenter) and that “they’re staging a sequence there even as you read this.” 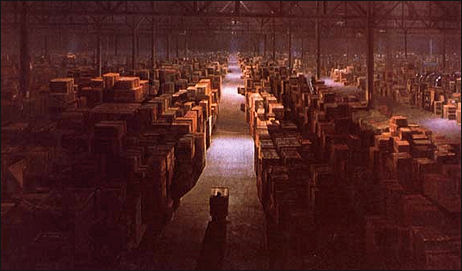 McWeeny says he’d “love to see what this warehouse looks like, considering it’s one of the most iconic locations in any of the three movies so far.” Iconic, maybe, but I’ve always seen the Raiders warehouse finale as a real letdown. When I first saw it 26 years ago I said to a girlfriend, “This is how they’re ending it? Some guy driving a forklift? Shitty, dull, nothing. So the Ark has been ignored and buried by the bureaucrats of the FDR administration…big deal.”