A longtime reader writing from Munich is claiming that as of today Bryan Singer, Tom Cruise and the Valkyrie crew have been granted official permission to shoot scenes in the big building in Berlin known as Bendlerblock, where the failed anti-Hitler coup d’etat was coordinated and where the anti-Hitler conspirators were executed by firing squad. 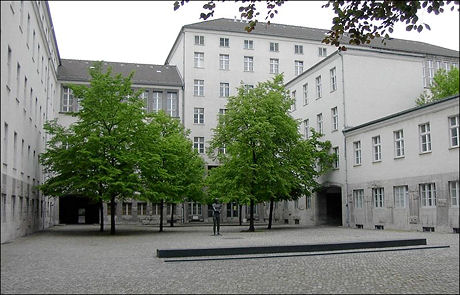 My Munich-based source says he works with a company that is doing business in the entertainment industry, but that the information has come from a friend “who works with the German defense ministry, which is the authority that is located in the very building.” A 9.14 Variety story reported the same thing.

Apparently the German government, which had officially denied the filmmakers access to the building in early July, gave the permit issue a re-think.

Among the scenes to be shot there are the machine-gunning of Colonel Graf Stauffenberg (Cruise) and his co-conspirators.

Note to Singer: Please, please don’t cut away from shots of Cruise and his fellow conspirators getting hammered by all that hot lead. It will be seen as a chickenshit move if you cut away. It’s your show, but I’m sensing that many thousands out there want to see Cruise hit the pavement, even if they haven’t acknowledged this to themselves in so many words. I’m just passing this along..