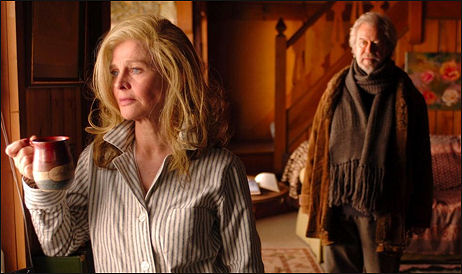 Julie Christie in Away From Her.

The second five (positions #6 through #10) are Angelina Jolie (A Mighty Heart), Laura Linney (The Savages), Halle Berry (Things We Lost in the Fire), Cate Blanchett again (in I’m Not There), Julia Roberts (Charlie Wilson’s War), Marketa Irglova (Once), Jodie Foster (The Brave One) and Charlize Theron (In The Valley of Elah).

Cotillard is a lock. Christie is very probable. Knightley is a maybe (because some believe that her role in Atonement is close to supporting-level). Page is said to have a headwind but I’m not so sure — she’s smart, gutsy and very likable but her Juno performance is basically a force-of-personality thing. A Blanchett nom for Elizabeth: The Golden Age is out of the question because the movie is a joke, but she’s absolutely miraculous as Blonde on Blonde Dylan in I’m Not There. (Harvey, you know what to do.)

Jolie gave the best performance of her life as Marianne Pearl in A Mighty Heart, but the quick box-office death of this film (which shouldn’t matter) seems to matter to some. Linney is excellent in The Savages, but the movie’s a grim sit. Paramount/DreamWorks won’t let me see Things We Lost in the Fire so I don’t know about Berry. Julia Roberts has too small a role in Charlie Wilson’s War to qualify. Marketa Irglova is fresh and lovely in Once, but she’s not in the game. Foster gives a full-of-feeling performance in The Brave One but I don’t think it’ll happen (in part because the shoot-em-up story is too ’70s, in part because the ending was too much, in part because the movie fizzled). For my money Charlize Theron is better in Elah than she was in North Country, but that doesn’t cut any ice with the people who are determined to keep this film down and tied up in a burlap bag.

Somebody said it last summer (maybe Poland): Each movie is its own little war.