HE reader Dan Brown saw Paul Thomas Anderson‘s There Will Be Blood at Austin’s Fantastic Fest last night, and his first reaction is that Daniel Day Lewis will indeed get an Best Actor Oscar nomination. “The film really belongs to Lewis,” he says. “He commands every frame he’s in and is a pleasure to watch. It’s a great character and he really sinks his teeth into it.” 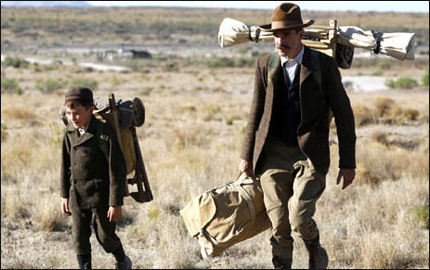 Which is an apt phrase given that Anderson, who attended the screening and sat for a q & a session afterwards, said “he was thinking of Dracula” when he wrote Lewis’s character.

“The film is an awesome achievement,” says Brown, “and a great step forward for Anderson. A lot of the criticism being directed at Wes Anderson lately does not apply to this Anderson, who is clearly moving in different directions with each new film but still has a strong visual style.

“I know the film won’t be well received by everyone. The two and a half-hour running time might be off-putting for Middle American styrofoams but I was really into the movie right from the start.” The most interesting sounding aspect, he adds, is that “the first 15 to 18 minutes of the film are dialogue-free.”

Variety‘s Marjorie Baumgarten was also there, and has called Anderson’s film “a true American saga — one that rivals Giant and Citizen Kane in our popular lore as origin stories about how we came to be the people we are. In The Treasure of the Sierra Madre it’s not the gold that destroys men’s souls but greed; in There Will Be Blood, the commodity that drives the greed is oil.”