I’ve made some mistakes in my life, but I sleep pretty well because I’ve also done a few things right. Like having watched only two episodes of the The Brady Bunch series in my entire life, and having deliberately avoided Betty Thomas‘s The Brady Bunch Movie when it came out in the mid ’90s. Admittedly, I avoided out of ignorance, not knowing at the time that the backstage shenanigans among the Brady Bunch were like something out of a Radley Metzger flick from the ’70s, or perhaps even one by Pier Paolo Pasolini. 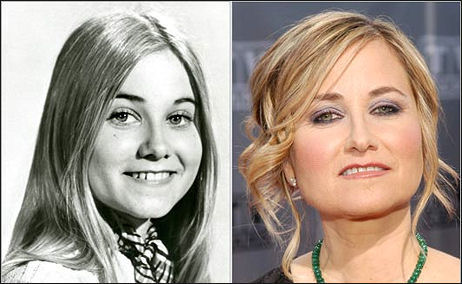 The closer was yesterday’s CBS News report that a forthcoming book by Maureen McCormick (i.e., “Marsha” on the series) may tell of a lesbian affair between herself and costar Eve Plumb (i.e., “Jan”). The story also says that the book’s publisher, William Morrow, is denying that McCormick will reveal an affair with Plumb, and okay, maybe the report is b.s. But if you were a 51 year-old sometime actress looking to sell some books about your one successful TV series that peaked 35 years ago, wouldn’t you be inclined to include something in your book that might actually stir interest?

The Metzger analogy comes from the combination of (a) the lezzy thing (if true), (b) Brady costar Barry Williams‘ admission in “Growing Up Brady” that he dated (and presumably was somewhat interested in boning) on-screen mom Florence Henderson as well as McCormick, and, of course, (c) the closeted gay life of Robert Reed (dad “Mike Brady”) and his death from AIDS in the early ’90s.