I’ve had a copy of Aaron Sorkin‘s Charlie Wilson’s War screenplay on my desktop for months, but I wasn’t going to run any portions (if at all) until later in the year. It’s a good script — good enough to make me feel optimistic about this Mike Nichols-Tom Hanks-Phillip Seymour Hoffman-Julia Roberts political dramedy, which doesn’t open until 12.25.07 — but there’s plenty of time to run anticipatory warm-up pieces. 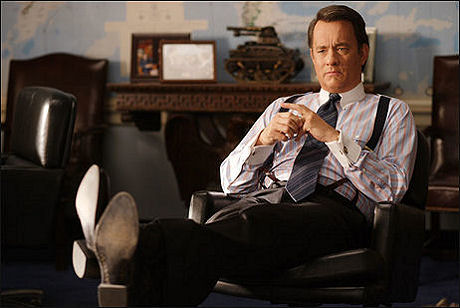 Now comes an AICN review/reaction of a Charlie Wilson’s War research screening by a guy named “PENNENINK.” It’s a 90% positive piece with three samples of Sorkin’s dialogue. Sample #1 (spoken by Hoffman’s character: “I’d like to hold a meeting to review the ten different ways in which you’re a douchebag.” Sample #2: asked why Texas Congressman Charlie Wilson (Hanks) only uses big-breasted women as his secretaries, a woman in his office answers: “Mr. Wilson has a saying — you can teach a girl to type but you can’t teach her to grow tits.” Sample #3: Wilson, reflecting on U.S policies in the Middle East and elsewhere, says at the end that “as usual, we come in [to a country], change the politics and leave. But you know what? That ball? It keeps bouncing…even after we’ve left.”

Hey, how come an early Charlie Wilson’s War teaser-trailer hasn’t made the rounds? The movie opens 14 weeks from now — a flick of an eyelash — and there’s not even a bare-bones website up yet. Universal’s strategy seems to be to just stretch out in the hayloft and wait it out — i.e., create anticipation by doing nothing — and then blast ouf of the barn and throttle up the engine starting in (I’m guessing) mid to late November.

The big question, of course, isn’t whether or not the public will take to this movie, but what will Variety‘s Robert Koehler have to say? As Koehler goes, so goes the too-hip-for-words, inbred-cineaste clique…and if this crowd is against you, they can interrupt or at least interfere with awards-talk momentum. Just a thought.