Richard Corliss Darjeeling Limited Venice Film Festival Blast #1 (about the similarities between Owen Wilson and the character he plays): “It’s a shock, but not a surprise, to see Owen Wilson in The Darjeeling Limited, the new semi-comedy from Wes Anderson that premiered at the Venice Film Festival last night.” And a little jarring, he adds, when you consider dialogue in which Owen’s head-bandaged character says he has “some healing to do” but is “still alive” after he “smashed into a hill on purpose on my motorcycle.” 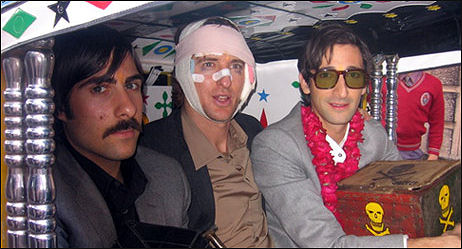 “As Francis Whitman, the eldest of the three Whitman brothers, Owen is clearly in physical distress,” Corliss reports. “His head is wrapped in two thick bandages, one horizontal, one vertical, as if to keep his brains from seeping out. The nose Wilson’s fans know to be charmingly broken has a Band Aid on it. His right hand and wrist are taped, and he uses a cane to walk.

“He looks a mess — funny, in the context of the film; not so, given Wilson’s hospitalization a week ago for what was described as a slashed-wrist suicide attempt. The actor was released Saturday and is in his Santa Monica home, People.com reported, under 24-hour watch by friends and family, instead of on the red carpet in Venice.

“In the movie, Francis is a man on a quest: to reconnect with his brothers Peter (Adrien Brody) and Jack (Jason Schwartzman). They’ve met in India, on a long train trip, for what Francis hopes will be a three-way spiritual quest. ‘I want us to be completely open,’ he tells Peter and Jack, ‘and say yes to everything, even if it’s shocking and painful.’ Okay, then, Peter has an open question for Francis: ‘What happened to your face?’

“He had an accident, Francis replies, and banged himself up pretty severely. Of his surgeons, he says, ‘They did all the procedures right, the result of which is I’m still alive.’ He admits he has ‘some healing to do,’ to which Jack cheerleadingly says, ‘Gettin’ there, though,’ and Peter offers the compliment, ‘Gives you character.’ Later Francis reveals that the incident was not quite an accident: ‘I smashed into a hill on purpose on my motorcycle.’

“This — along with the fact than Wilson is one of three brothers (Andrew and Luke are in movies too) — concludes the witness report on the coincidences between Francis Whitman and Owen Wilson. Enough already. I feel creepy just passing this information along, as if a critic were auditioning to be a coroner.”