“The seminal vigilante film of the era — or any era — is Michael Winner‘s Death Wish (1974),” writes Slate‘s Eric Lichtenfeld. “Based on Brian Garfield‘s novel, the movie immortalized Charles Bronson as Paul Kersey, an everyman who responds to the brutalization of his wife and daughter by obsessively smiting muggers and other ‘freaks’ (as the credits bill his family’s attackers). 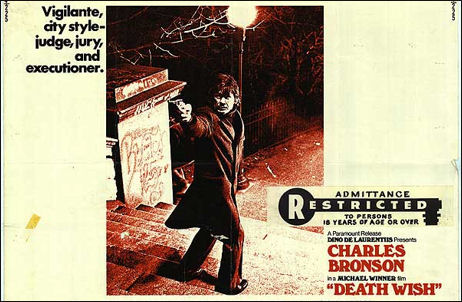 “This is far from where Kersey began: a progressive raised to hate guns, and a wartime conscientious objector. Of course, Kersey’s liberalism exists only so it can be corrected later. Liberals are similarly ‘reformed’ in the new Jodie Foster movie, The Brave One, as well as in Vigilante, Death Wish 3 and The Enforcer, in which a cop’s widow makes the point, ‘It’s a war, isn’t it? I guess I never really understood that.'”