In describing the currently-shooting Che Guevara films — The Argentine and Guerilla — in the October 2007 Esquire, Benicio del Toro, obviously a big Rolling Stones fan, tells profiler Chris Jones that “we’re trying not to do Che’s greatest hits.” And then he explains what that means. 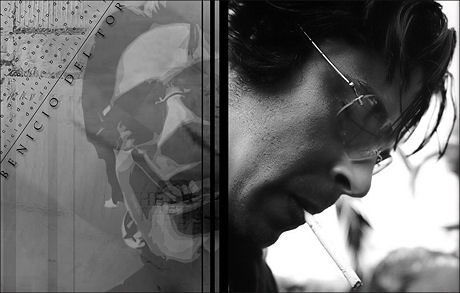 “If you’re doing a greatest hits of the Rolling Stones, you probably open up with ‘Satisfaction’ and then you finish the first side of the album with ‘Sympathy for the Devil,'” Del Toro begins. “And then you open side two with ‘Gimme Shelter’ and you close with ‘Start Me Up.’ Well, we’re trying to start with ‘Blue Turns to Grey’ and finish with ‘Stray Cat Blues,’ and then start the second side with ‘Luxury’ and finish it with ‘Infamy’….something like that.”

In my April ’07 piece on Peter Buchman‘s two Che screenplays, I called The Argentine “political and terse and rugged…about how living outside the law and fighting a violent revolution feels and smells and chafes on a verite, chapter-by- chapter basis. They’re about sweat and guns and hunger and toughing it out… friendships, betrayals, exhaustion, shoot-outs and trudging through the jungle with a bad case of asthma. What it was, how it went down…the straight dope and no overt ‘drama.'”

Steven Soderbergh is currently directing the films in Spain. They’re expected to open next year with weeks of each other, although I don’t know what season. Early to mid fall is my guess — I haven’t made the calls.