Diablo Cody is the shit

Some of the voice-over dialogue in the first ten or twelve minutes of Juno (Fox Searchlight, 12.14) is a little too clever, but this impression doesn’t linger. An impression that has lingered and is gaining cred by the week is that the film’s screenwriter Diablo Cody is a likely contender for Best Original Screenplay.

I’ve been telling myself this, at least, since seeing Juno at the Toronto Film Festival, but after looking at this 18-month-old video of Cody talking to David Letterman, I’m thinking it’s all but locked. She’s doing a bit here but it’s great material — brash and bawdy but curiously innocent and unaffected.

On top of which there’s this shot of herself she posted last January. The lady reminds me in an odd way of mid ’70s Patti Smith in that she’s absolutely fearless about saying whatever’s on her mind (and without precisely knowing what that might be). There’s also a dose of Sarah Silverman in there along with a little dab of Tallulah Bankhead (although Cody doesn’t sound like a drinker). In short, the stuff of instant legend. 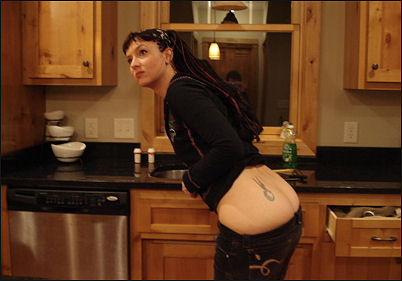