It is axiomatic that one must must approach all Canadian-produced films chosen to open the Toronto Film Festival with extreme caution. Jeremy Podeswa‘s Fugitive Pieces, which I just walked out of, conveys this tendency in spades. I was out the door after 30 minutes, but I was looking at my watch after the first 15 minutes. I don’t care if it kicks in at the one-hour mark or whatever — I won’t sit through films like this. 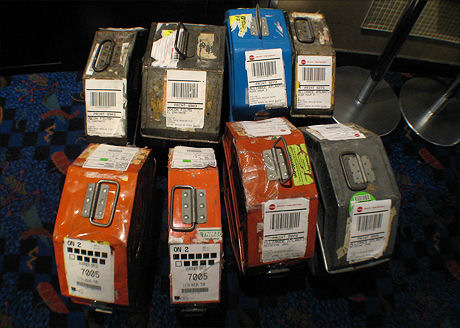 Expelled for the duration of the festival, and perhaps beyond. We will have no more to do with thee..be gone! Snapped in a Cineplex Odeon hallway after excusing myself from Jeremy Podeswa‘s Fugitive Pieces — Thursday, 9.6.07, 9:35 am

I guess this means I’m dead meat as far as the film’s producer, Robert Lantos, is concerned. If I run into him at at a party I’ll say I’m somebody else.

Pieces is a doleful past-and-present drama about a 40ish Holocaust survivor (Stephen Dillane) who finds it difficult coping with the present with so many World War II ghosts swirling around in his head. I can’t personally cope with Dillane — he kills each and every film and play that he’s in with his withered, crinkly-faced dweeby-ness. And I didn’t believe for a second that a 51 year-old pill like Dillane would entice a 28 year-old blonde hottie (Rosamund Pike, last in Fracture) to hop into bed with him and then propose marriage in fairly short order.

I’m going to catch the last half-hour of Juan Antonio Bayona‘s The Orphanage. Saw it twice in Cannes, and that wasn’t quite enough.