The top five Gurus of Gold Best Actor contenders are Daniel Day Lewis (There Will Be Blood), Tommy Lee Jones (In The Valley of Elah), James McAvoy (Atonement), Johnny Depp (Sweeney Todd) and Emile Hirsch (Into the Wild). 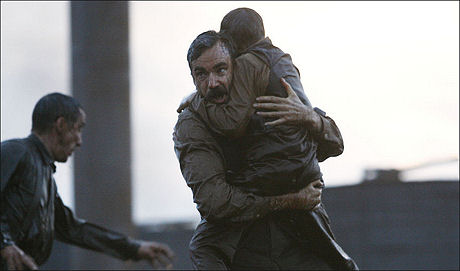 Daniel Day Lewis in There Will Be Blood

The vulnerable wildebeests at this stage seem to be Depp and Hirsch — the former because of growing presumptions that Sweeney Todd will be regarded as being too bloody to be a Best Picture contender, and that the fiendish slitter of all those throats may get pulled down along with the film, and the latter because of the sentiments of that producer I heard from earlier today, which, I’ve been told, have been voiced by others.

Lewis’s chances are obviously undefined until people start seeing and reacting to There Will be Blood. I’m pretty sure that Jones and McAvoy are locks.

Two guys may wind up taking Hirsch and Depp’s place — American Gangster‘s Denzel Washington and Before The Devil Knows You’re Dead‘s Philip Seymour Hoffman. They both kill in their respective roles as a Harlem-based, Al Capone-styled heroin wholesaler and a drug-dependent, morally downswirling businessman who hatches a plot to rob his parents’ jewelry store.

The guy who should be in the top five, no question, is Control‘s Sam Riley. I don’t care if anyone knows him or how new he is to the business. His performance as late Joy Division singer Ian Curtis is astoundingly well-calibrated. The fact that Riley never seems to be “acting” is the genius-level ingredient. And yet not one Golden Guru voted for him, and they should be ashamed of themselves for blowing him off in so total a fashion. I mean it — each and every Guru needs to go outside, light a cigarette (even if they don’t smoke), take a 20-minute walk and ask them- selves why they failed to even mention one of the absolute finest performances of the year by an actor of either gender. I’m sorry, but this falls under the heading of “dereliction of duty.” For this oversight alone, this team needs to be regarded as the Gurus of Shame.

The Guru’s second five are Denzel, Eastern Promises‘ Viggo Mortensen (forget it), the Charlie Wilson’s War star Tom Hanks (conceivably), Michael Clayton‘s George Clooney (he got his Oscar for Syriana…won’t happen) and The Diving Bell and the Butterfly‘s Mathieu Almalric (an Oscar for a guy blinking his left eyelash?).