Wes Anderson‘s Hotel Chevalier, that 13-minute short currently being shown prior to The Darjeeling Limited at film festival and critics’ screenings, will have its world public premiere next Tuesday (10.2.07) at Apple stores in L.A., New York, Chicago and San Francisco. It will also be a free download on iTunes the following day (Wednesday, 10.3). It will also, as previously announced, be included on the Darjeeling DVD. 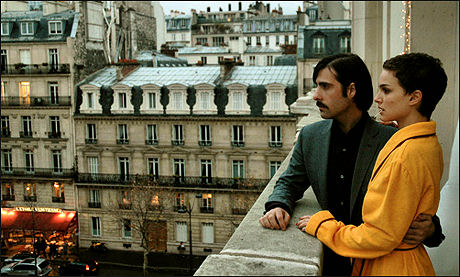 It’s basically a piece about Jason Schartzman‘s Darjeeling character (one of the three emotionally congealed brothers who train across India in the feature) being visited at an amber-lit Paris hotel by his not-quite-ex-girlfriend, played by Natalie Portman. You can feel that all kinds of dark stuff has happened between them. They’re not a couple any more, but they have sex anyway. Naturally, given the agenda, Portman gets naked. (Interestingly, Schwartzman doesn’t.) Then they stand together on the carved-stone balcony and gaze at the storied surroundings, and the early-evening nightlife below.

L.A. Times writer Chris Lee reports today that “if Anderson has his way, Hotel Chevalier will be added to theatrical showings of the feature after it has run for a few weeks. ‘We were unsure how this needed to be presented,” he tells Lee. ‘We felt they should be connected and [we] searched for how to do that. In the end, I liked the idea that one person could see it in one way, and another could see it in totally another way.'”