“In The Shadow of the Moon”

David Sington‘s In the Shadow of the Moon may be the only patriotic, hooray-for-America film I’ve ever truly enjoyed and felt good about afterwards. Since I was in college, I mean. This obviously says as much as about me as it does about the film, but what has this country done besides spearheading the defeat of Nazi Germany and exporting awesome cultural stuff (rock music, hamburgers, iPods, good movies) that’s been seen as 100% beneficial to mankind besides the space program? Think about it. 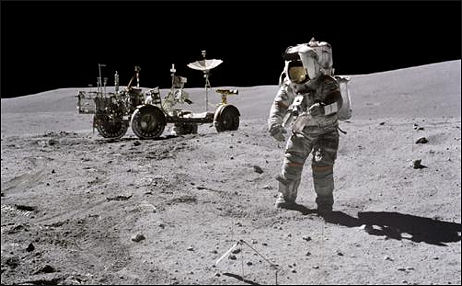 We have truly come a long way over the last 35 to 45 years. In the heyday of the Mercury, Gemini and Apollo space programs we were seen (at least in part) as can-do god guys, and today our foreign policy moves have made us the most loathed and despised big industrial country anywhere. The specific targets aren’t U.S. citizens as much as the Bushie neocons running the show, but we’re still vying for the title of being the most hated country of all time after Nazi Germany.

I’d kind of forgotten that the space program, although it was mainly seen at the time as a technical triumph by an elite club of white-collar scientists and bureaucrats, was a real ray of light. I love the slogan on the poster: “Remember when the whole world looked up.”

In The Shadow of the Moon is basically a lot of handsome digitally restored footage of the Apollo moon missions intercut with some very appealing (i.e., intimate, even vulnerable-seeming) interviews with a few retired astronauts — Buzz Aldrin, Alan Bean, Eugene Cernan, Michael Collins (my favorite of the bunch), Jim Lovell, Edgar D. Mitchell, Harrison Schmit, Dave Scott and John Young. And it just works. It’s all about personal impressions, feelings, what it was like from deep within. It’s a genuine high, this film. It really gets hold of something and massages it just right.

The best moment comes when Collins describes reactions around the world to the first Moon landing (which he was a part of). “Everywhere people were saying instead of saying, well, you Americans did it…everywhere they said we did it, the human race, people…we did it. And I thought that was a wonderful thing.”