Ishkanian lawsuit against Us

Yesterday David Hauslaib, Debbie Newman and Rebecca Aronauer‘s Jossip posted what looks like most of Jill Ishkanian‘s $55 million lawsuit against Us Weekly and her old bosses, particularly Ken Baker and Janice Min. 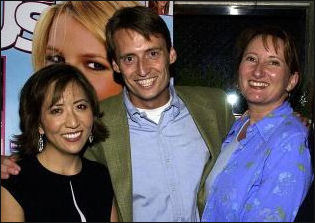 I searched The Smoking Gun and they don’t have this….derelict, slacking off.

The lawsuit makes for extremely icky reading. What a nest of vipers! Straight out of a tawdry TV soap opera. Some people laugh at this stuff; I was mainly shaking my head.

It basically alleges that Baker, Us‘s former West Coast bureau chief (and then West Coast executive editor) occasionally marginalized and undermined Ishkanian while she worked at Us as a news reporter, and then, after Ishkanian left to former Sunset Photo Agency,may have been part of an information chain that led to the FBI raiding the offices of Sunset Photo Agency out of concern that Ishkanian may have taken or used contact information owned by Us (or so the lawsuit seems to imply). And yet no actions of any kind resulted from information gathered by this FBI raid.

For what it’s worth, I occasionally worked with Baker at People magazine during my stint there from ’96 to ’98. We did field reporting together in the Pacific Grove area after John Denver was killed in a plane crash in October ’97. He’s a good writer, a sharp and very thorough reporter, and a first-rate human being.