Yesterday brought a Borys Kit Hollywood Reporter story about Jennifer Garner being “in negotiations” to star opposite Matthew McConaughey in New Line’s Ghosts of Girlfriends Past, a Christmas Carol-ish romantic comedy about “a bachelor visited by ghosts of past and future girlfriends who endeavor to connect him with his true love.” 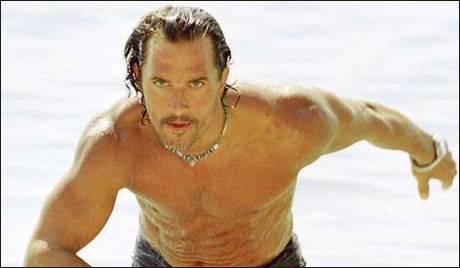 My reaction, naturally, was one of instant nausea. But it was heartening to learn soon after that at least one other McConaughey hater felt the same way. The combination of McConaughey, Garner and the insipid-sounding plotline inspired Burbanked.com’s Alan Lopuszynski to construct a McConaughey rom-com chart indicating that MM’s actress costars tend to wind up with poorly-written roles and poor reviews.

Although N.Y. movie writer Lewis Beale once called McConaughey “the Robert Cummings of our time,” it’s an article of faith in some quarters that he’s a true Hollywood Beelezebub. I ran a piece along these lines on 7.16.06, called “King of the Empties.” Here it is, reprinted and repasted:

“I’m developing an idea that Matthew McConaughey is a kind of anti-Christ. I’m 35% to 40% serious. He may not be the Satanic emissary of our times, but I honestly believe if and when the real devil rises up from those sulfur caverns and begins to walk the earth, he’ll look and behave exactly like McConaughey.

“He’s not just the absolute nadir of empty-vessel pretty boy actors. I’m talking about an almost startling inner quality that transcends mere shallowness. It’s there in McConaughey’s eyes…eyes that look out at the wonder and terror of life but do nothing but scan for opportunity…something or someone to hustle or seduce or make a buck off. Eyes that convey a Maynard G. Krebs-like revulsion at the idea that life may finally be about something you can’t touch, taste or own. 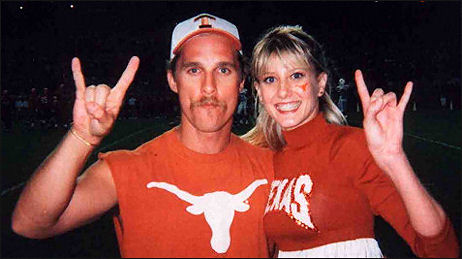 “He has the soul of a Texas bartender who dabbles in real estate and has an overly made-up and undereducated girlfriend who drops by at the end of a shift to give him a lift home, except that he tends to ignore her when there’s a good game on and all his empty-ass buddies are there…a bartender who will clean shot glasses for 20 minutes before looking in your direction…a guy with a thin voice and a hey-buddy Texas drawl who sorta kinda needs to be stabbed with a screwdriver.

“I’ve known guys like McConaughey all my life, and I feel I’ve come to know them as a predator tribe. Guys with fraternity associations and shark eyes and quarter-inch- deep philosophies that tend to start with barstool homilies like “the world is for the few.”

“Because of this I can easily wave away his respectable performances in Dazed and Confused and Reign of Fire and focus on the void. I agree about these standout performances and his being tolerable in one or two other films (U-571, etc.), and because of this I was able to handle his being in movies without cringing for years.

“But then came the double-whammy of Two for the Money and Failure to Launch, and now the mere mention of his name… 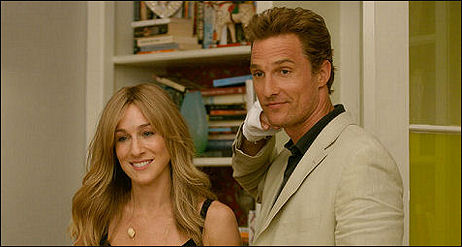 With Sarah Jessica Parker in scene from Failure to Launch

“McConaughey is the emperor of the so-called vapid squad. He can kick Paul Walker‘s ass with one hand tied behind his back, in part because Walker is now off the shit list after his sweat-soaked danger-freak performance in Wayne Kramer‘s Running Scared. Forget the unfairly maligned Matthew (a.k.a., “Matt”) Davis, who gave a genuine and unforced performance as a decent-guy football player in John Stockwell‘s Blue Crush…next to McConaughey he’s almost Brando-level.

“I forget who the other contenders are but none of them hold a candle to McConaughey because they haven’t got that deep-down emptiness, which is what it’s all about. Not a matter of craft or affability, but essence.”