The gay bars in William Friedkin‘s Cruising “are portrayed as a kind of hell, photographed in a near-monochromatic black-and-blue color scheme, with an emphasis on heat, humidity, human sweat and sulfuric cigarette smoke,” writes N.Y. Times DVD columnist Dave Kehr. “Though some scenes were fogged up to avoid censorship for the initial release, they are now presented [on the just-released deluxe edition DVD] as Friedkin shot them. 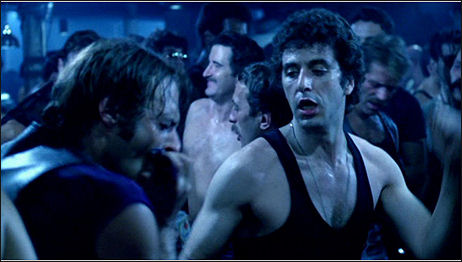 “The film seems to be moving toward a generalized guilt, proposing new suspects at every turn — a homophobic but secretly gay policeman (Joe Spinell), a police captain with a mysterious agenda (Paul Sorvino), the psychotically jealous roommate (James Remar) of a lovable theater queen (Don Scardino) and ultimately Burns himself — all contained in the faceless figure of a man in a leather mask who pops up at key moments” and who later, per Friedkin’s somewhat unfocused strategy, turns out to be “a disappointingly trite perpetrator.”