“If a more facile, stupid, condescending, predictable, smug, exploitive, corrosively despicable piece of wanna-be transgressive horseshit was ever made, then let’s have it, because I really am too old to take on a new profession just to get even with this asshole.” — The Reeler‘s S.T. Van Airsdale expressing rage over Nothing is Private and its director-writer, Alan Ball. 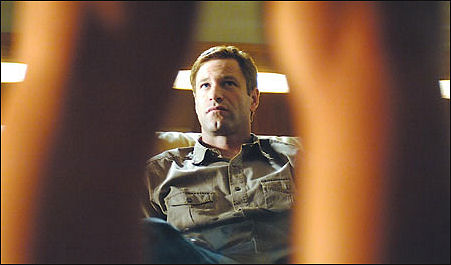 Aaron Eckhart in Alan Ball‘s Nothing Is Private.

I’ve heard more than a few people express similar sentiments over the last two or three days. They don’t dislike this film; they hate it. I feel very differently. I don’t just respect it (as well as the book, “Towelhead,” upon which it’s based); I admire it.

In last Monday’s review I called it “a sturdy, complex character drama that’s 100% deserving of respect…it’s obviously one of the most original, daring films about adolescent sexuality ever delivered by a quasi-mainstreamer…iIt’s also a sharp look at racism (and not just the American-bred kind) and a sobering portrait of the rifts and tensions between American and Middle-Eastern mindsets.”