N.Y. Times critic A.O. Scott has taken a fountain pen and more or less stabbed Wes Anderson right through the heart in his Darjeeling Limited review. 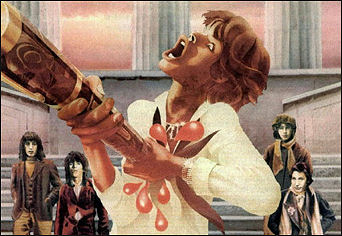 He’s calling the film “precious, unstintingly fussy, vain and self-regarding,” and says that the “humanism” of Jean Renoir or Satyajit Ray “lies either beyond [Anderson’s] grasp or outside the range of his interests.

“His stated debt to The River, Renoir’s film about Indian village life, and his use of music from Ray’s films represent both an earnest tribute to those filmmakers and an admission of his own limitations. They were great directors because they extended the capacity of the art form to comprehend the world that exists. He is an intriguing and amusing director because he tirelessly elaborates on a world of his own making.”

And yet Scott also calls Darjeeling “a treasure: an odd, flawed, but nonetheless beautifully handmade object as apt to win affection as to provoke annoyance. You might say that it has sentimental value.”