A relatively small group of industry journalists — I’m talking maybe 25 or 30 people, if that, not counting their editors — report about movie company kingpins, and particularly about the state of their swaggering egos and the moves they make every so often that affirm and underline their sense of worth, power and entitlement. I for one have never found this stuff interesting. Does anyone? 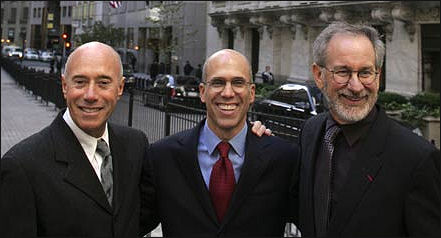 Steven Spielberg, David Geffen and Jeffrey Katzenberg washing their hands of their two-year-old Paramount deal will have what impact upon the price of rice? Upon the state of movie art and entertainment as it concerns myself and the film-buff community? At best, the SKG departure is something to talk about for one or two minutes at a party.