Every so often the buyers (i.e., distribution reps) totally miss out on a film’s importance and marketability, and this was certainly the case with Toronto buyers and Sidney Lumet‘s Before the Devil Knows You’re Dead. It’s even the case right now among certain journalists who don’t seem to fully understand that this modern-day Greek tragedy/family-crime film — unquestionably among the top flicks of ’07 — is well positioned to score with critics groups and Academy members between early December and mid January ’08. 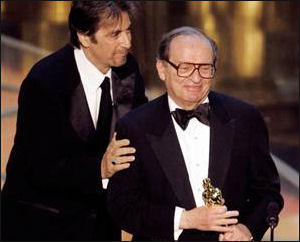 The selling point with the latter group won’t just be the film (which, in a perfect world, would be enough in itself), but the metaphor of a spunky 83 year-old director whacking a fastball into the left field bleachers. Most directors of Lumet’s age are happy to be in good health and be invited to take part in an occasional film festival tribute. Lumet having produced the best film of his career since Prince of the City can be read (if you’re so inclined) as a blow against ageism in every sector of the industry. Older Academy members are going to feel at least somewhat roused by this, and consider Before The Devil Knows You’re Dead accordingly.