Willman on “I’m Not There”

On EW’s Popwatch, Chris Willman responds to last Friday’s Telluride premiere of Todd Haynes‘ I’m Not There and says it’s “every bit as loopy as you’ve imagined, assuming you’re familiar with the conceit — six different actors playing various aspects of Bob Dylan‘s personae with good portions playing as a No Direction Home parody. 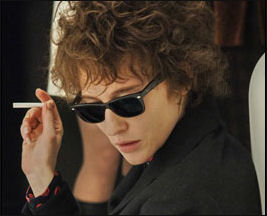 “Like a lot of my fellow Dylanologists in the audience, I chuckled at the sections that use dialogue from Dylan’s press conferences and concerts almost verbatim, but for the non-buffs I’ve talked with, it seems to play out pretty much as a 2-hour-and-15-minutes series of in-jokes.

“Most successful at incarnating Dylan, oddly enough, is Cate Blanchett, getting the most screen time and obviously having a ball playing the Blonde on Blonde-era Dylan with a fright wig.

“Visibly suffering onscreen, meanwhile, is poor Richard Gere, who plays Dylan as Billy the Kid — or maybe playing an actor playing Billy the Kid? Ã¢â‚¬â€ and looks even more baffled about what he’s supposed to be doing than we are.

“Somewhere in between are Heath Ledger who plays Dylan as a hot Hollywood actor (although this makes no sense, Ledger’s section dramatizes the protagonist’s divorce from Sara Dylan while heading even further into the realm of fictionalization) and Christian Bale (portraying him in both his folk-singer and born-again phases), and, yes, an African American lad who likes the ride the rails, a la Woody Guthrie (and bringing to mind The Jerk, since apparently Dylan, too, was born as a poor black child).

“At least I’m Not There is more coherent and commercial than Dylan’s own 2003 writing and starring effort, Masked and Anonymous. But maybe not a lot more.”