“Arriving late in a movie confab like [Telluride], after days of standard film-fest death-and-degradation fare, a blithe-spirited confection like Juno has some odds in its favor when it comes to becoming a festival’s runaway popular hit,” EW/Popwatch‘s Chris Willman has noted. “But Jason Reitman‘s movie earned that unscientific honor here largely on merit, not just its unfair comedic advantage. 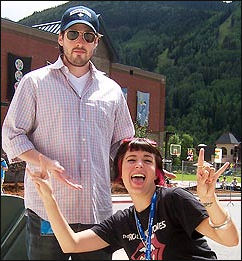 “Even coming down the mountain into the less mirth-deprived or oxygen-deficient environment of the multiplex later this year, Juno is still going to play like gangbusters. Fox Searchlight certainly thinks so. They recently made the decision to start rolling Reitman’s film out on December 14 — which, as screenwriter Diablo Cody says on her blog, ‘is not a messin’-around release date. It’s kind of a scary release date. It’s a we-believe-in-you release date. I believe in me, but I also believe in Crystal Light, so it seems my trust is easily won.'”

Here’s an audio interview with Reitman and Cody, recorded at Telluride.