An IFC News video clip of John Landis during his recent N.Y. Film Festival press conference for Mr. Warmth: The Don Rickles Project, which several L.A. journos would love to see sometime soon. “Not a comedian but a performance artist….and the judge laughed.” The public NYFF screening is (or was) today.

Does anyone find the MPAA’s decision to give Robert Zemeckis‘ Beowulf (Paramount, 11.16) a PG-13 rating a little puzzling, or at the very least inconsistent? Lots of intense (one could say orgiastic) violence and a haunting use of frontal female nudity (a digitally reconstituted Angelina Jolie) would normally result in an R.

As reader David Adams wrote this morning, “Judging from the red-band trailer they either sliced it up to get the rating (only to return the footage for the ‘Special Edition Director’s Cut DVD’) or someone at Paramount sent the MPAA the biggest fruit basket ever made.”

A San Francisco guy named Bob Bowman recently wrote the following to Roger Ebert: “Wouldn’t it be great if someone were to commemorate the 40th anniversary of the release of 2001: A Space Odyssey next year by striking new prints and showing the movie on IMAX screens across the country? What a fantastic experience that would be!” Ebert said that the idea “seems almost inevitable. And remember that the film was shot in 70mm, so it would look even better.” 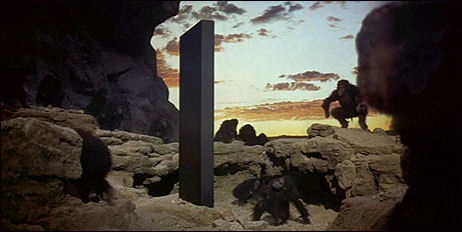 I would do backflips over this. And Ebert is right — the process by which 35 mm films are transferred to IMAX has gotten pretty good, so a 70mm transfer would look even better. The precise 40th anniversary will be on 4.3.88 — less than seven months away. If this is being planned they’ve almost certainly already begun the work. I wrote a couple of p.r. people this morning to see if they know anything. Does anyone?

A new 2001 DVD is coming out a week and three days from now. A first-graph line in Ebert’s 1968 review sums it up nicely: “The fascinating thing about this film is that it fails on the human level but succeeds magnificently on a cosmic scale.”

The first Academy screenings for Charlie Wilson’s War (Universal, 12.25) have been scheduled for Monday, 12.3 — one in New York, one in Los Angeles. This plus director Mike Nichols‘ tendency to finesse his films until the very last minute (like a lot of directors) plus his statement at last night’s American Cinematheque tribute to Julia Roberts that he’s still tooling around with it indicates no media screenings until after Thanksgiving.

Aaron Sorkin‘s War script loses its energy a little bit in the final third. It’s best in the first and second acts. The ending is okay — thoughtful, echo-y, a “hmmm” quality — but it’s not gangbusters. Endings aren’t everything, but they matter.

The numbers guys are saying the new Sleuth is already dead (it opened in 9 theatres this weekend and will only average about $4000 a print). Question is, does having seen the ’72 original — directed by Joseph L. Mankiewicz, Michael Caine and Laurence Olivier starring — improve or diminish the current version (Kenneth Branagh directing a Harold Pinter adaptation)? Worth a looksee. Joe Leydon is alerting the world to an airing of the oldie tomorrow night.

It hit me last weekend (along with several thousand others) that the failure of The Heartbreak Kid could mean that the Farrelly brothers are finished. It seems as if they are right now — yes, I’ll admit that, the curtain has come down. But they can get it right back if they make that Three Stooges movie they’ve been talking about for three or four years now, and I mean with Russell Crowe as Moe. I don’t care if he’s told them “no” a hundred times. He’s the only guy for that part. No one else.

It’s true that the Farrelly’s moment of perfect cultural synchronicity — a four-year stretch that began with Dumb and Dumber and ended with There’s Something About Mary — has passed, and that Judd Apatow has taken the king of comedy crown away from them. (Mary was nine years ago…the train has moved on.) It all comes down to the Stooges. Make it right (which hinges upon casting it right) and all is forgiven. And they can do it. I know they can.

The killing of Howard Dean‘s Presidential primary campaign was a deliberate media hit job. News producers played that “yeeahhhhh!” video clip (pulled from Dean’s speech to followers after his third-place showing in the 2004 Iowa caucus) hundreds and hundreds of times over the next two or three days until Dean had been turned into a complete clown, a punchline, a living Wilhelm scream.

And now Leonardo DiCaprio wants to portray Dean in a film version of a play called Farragut North, written by former Dean staffer Beau Willimon about “a novice but inspired campaign staffer who works for an unorthodox presidential candidate. George Clooney would direct and produced the film for Warner Bros.

The most interesting story, for me, wouldn’t be about the experience of a Dean campaign worker, but about how and why the “yeaahh!” clip was seized upon and exploited by the media in order to destroy Dean. He might have lost the nomination to John Kerry in the long run, but the clip killed him. It was one of those amazing media moments in which a political movement was assassinated so that a few hundred TV stations could broadcast a cheap laugh and maybe boost ratings. It was a defining triumph of media mediocrity.

Yesterday Variety‘s Ben Fritz and Dave McNary reported that Elizabeth: The Golden Age, Michael Clayton, Tyler Perry’s Why Did I Get Married? and We Own the Night “are expected to gross in the low- to mid-teens” in a kind of even-steven fashion, and I said I’d been told that Why Did I Get Married? would do “$20 million-plus, and that the others will come in at $10 to $12 million lowball, and $12 to $14 million at best.” That’s more or less what’s happened. My estimate, I mean, and not Variety‘s.

There’s too much product out there and product kills product, but despite the glut Why Did I Get Married? — far and away the weekend’s #1 film — will end up with $22,151,000 by Sunday night, give or take.

Elizabeth: The Golden Age has gone down to the sea in ships. It will take in $6,383,000 — 2000 theatres, $3200 a print. The women and older couples read the reviews and said “later.” Cate Blanchett‘s Ziggy Stardust has slipped beneath the waves and been embraced by Bill Nighy‘s Davy Jones. “You are one of us now,” he says as he looks into her eyes and her soul. “Tug on my facial squid tentacles and join us in eternal damnation.” 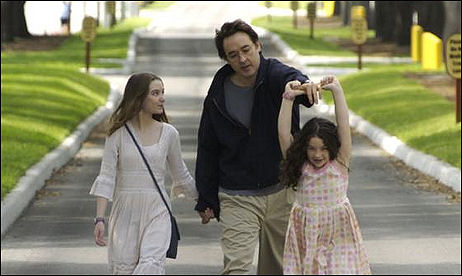 Grace Is Gone — a sad movie that makes you feel pretty good because it mostly feels right and true and uncluttered.

Bart is talking about movies about “revenge-seeking crime victims” (The Brave One), “terrorist assaults” (The Kingdom), “disappearing Iraq vets” (In The Valley of Elah) and “lovers who’ve learned to hate each other” (clueless). I wasn’t the least bit depressed by these three myself. You want depressing? Go see Elizabeth: The Golden Age. I honestly had thoughts about being taken to a hospital in an ambulance after seeing this film in Toronto.

Jodie Foster and Neil Jordan‘s film didn’t make me feel bad except at the end because I didn’t buy a cop saying to a pretty middle-aged perp he’s attracted to, “Shoot me in the fleshy part of my arm…fuck, that hurts!” The Kingdom‘s terrorist attack at the beginning wasn’t depressing in the least. People are getting blown up all the time in the Middle East these days…what? Plus it had a kind of jolting impact quality. And that cloying Annie Lennox song aside, I was turned on by Elah — by Tommy Lee Jones‘ immensely sad craggy face, the general depth of feeling, Roger Deakins‘ cinematography, etc. One of the least “depressing” films of the year, if you ask me.

In any case, feel-bad or feel-good isn’t what most people go to movies for. (Except for the idiots.) The idea is to experience some kind of distillation of something true and whole and eternal in life, and from this feel (and perhaps even learn) something that fortifies the soul — an absorption of values that stick to the ribs. I really don’t think people don’t want happy or sad — they want a sense of justice, insight, calm and recognition.

Grace is Gone is not a gloom trip, although some are probably muttering this to their friends. There’s a difference between sad and depressing. Sad is feeling that stirs you in a hurting, chest-flooding kind of way and makes you moisten or tear up. Depressing is being in a kind of jail in which you have three choices — suffer in silence, catch some zees or escape from Alcatraz (i.e., slip out the door after the publicists have left).

If a movie conveys a fundamental truth — something that makes you say to yourself, “Yup, that’s the way it is out there…the way people are, the way life sometimes goes” — and does so with clarity and economy with a little wit and edge with some likable, talented actors, people will usually come. Unless they’re really young or pathetically uneducated or red-state rube-ish (“Which movie gives the best quaalude high?”).

“I’m not a cinematic philistine,” Bart writes. “I applaud filmmakers for dealing with real issues in the real world. At the same time, the feel-bad genre (which is only in its early stages) is becoming downright oppressive. Filmgoers have a right to ask: When do we get some comic relief?”

Give us the pat homilies of The Bucket List, he seems to be saying. (I’m reading the script as we speak.) Give us a solid movie about values and setting straight the sins of the past like The Kite Runner. And please, not too many arterial throat soakings in olde London. We know There Will be Blood will be great, but not too violent at the end! And most of all, give us a nice feel-good movie about Tom Hanks, Phillip Seymour Hoffman and Julia Roberts single-handedly helping the Muhjadeen to kick the Russians out of Afghanistan in the 1980s.